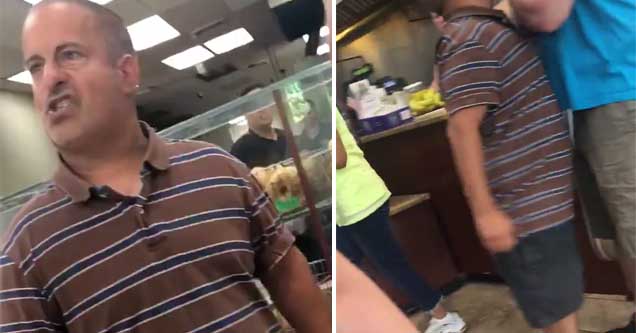 By now, you've probably heard about the "Bagel Boss" guy, a middle-aged man who went on an angry misogynistic rant about women hating on short guys (such as himself) at a Bagel Boss location in Hicksville, NY. If you haven't seen it yet, watch that video here.

The man was seemingly set off by what he thought were some women smirking at him - which he presumed was due to his stature. His Napoleon Complex seemingly knows no bounds, and he immediately started berating anyone and everyone who happened to be in his path. Thankfully, some nameless hero who happened to be in line finally got sick of listening to him and tackled him to the ground (he kept fighting nonetheless).

That video went almost instantly viral, and it wasn't long until internet sleuths were able to dig up additional dirt on the guy.

boss bagel guy has a youtube channel where he goes to be extremely racist, antisemitic, misogynist and stupid as all get out in public with his real actual name attached. somebody ruin this mans life. pic.twitter.com/NNnQIysugo

Turns out, Bagel Boss guy is a Long Island resident who has a YouTube channel under the name "Chris Morgan." The videos on there are pretty much what you'd expect from a fine specimen such as this - anti-semitic, racist, and misogynistic. Here's a couple of choice samples:

Of course, whenever something goes this viral online, there are PLENTY of reactions to it. Twitter had a whole lot to say about it, so without further ado, let's dive in:

I hope the bagel boss guy comes back to the store today and acts like nothing happened.

“Would you like to try one of our mini bagels?”

“GET THAT SMIRK OFF YA FACE LADY!”

THIS IS FOR ALL THE BOYS IN MIDDLE SCHOOL WHO MADE FUN OF MY SMALL BREASTS!

All the customers in Bagel Boss today pic.twitter.com/ez0Sad0AYs

how many times have i watched the bagel boss video pic.twitter.com/46SCAGB1TD

And at this moment little man knew he bit off more than he could chew.... #bagelboss pic.twitter.com/kmImtu8vQc

Next week at Bagel Boss pic.twitter.com/msKTlbDkAF

That Bagel Boss guy walked in there like pic.twitter.com/zRXd9mKMZQ

Bagel Boss has decided to place this sign in front of all stores tomorrow. pic.twitter.com/2NxutaUcH4

This has to be the best version of the altercation at Bagel Boss pic.twitter.com/BlWVLUKPD2

The REAL Holy Trinity according to the Bagel Boss guy pic.twitter.com/J3097P1lXH

History in the making at Bagel Boss pic.twitter.com/IshRtdFttE

If bagel boss dude thought he had trouble getting laid BEFORE... pic.twitter.com/Owy4zkk6su

How many times have you watched the Bagel Boss video?
Me: pic.twitter.com/lkex0oivhs

Hilarious memes and reactions aside, there were some users who also partially sympathized with the man for having one of his worst moments put on display for the whole world to see.

Just watched the Bagel Boss video and my only takeaway is that filming strangers in their worst moments and posting it on the internet for them to be ridiculed is a shit thing in our society that we should reflect on more and don't.

As a 5'7 guy, i feel his pain. It annoys me when girls avoid short guys like the plague. But it doesnt make me hate all women and generalize them. It also doesnt excuse his behavior. So yea he fucked up, but i also feel bad for the dude. #bagelboss