Marvel found themselves in the center of a Twitter firestorm recently after using the official account of its deceased creator, Stan Lee.  The post (seen below) appeared to be nothing more than an advertising for the upcoming Captain Marvel movie and followers of the account couldn't believe their eyes when checking their notifications.

Captain Marvel landed in Hollywood this past Monday for the movie’s premiere! Read more about the evening below: https://t.co/EEzgZSPX3W

As expected, users quickly responded with their disgust and awe in replies to the original tweet (below), many pointing out this is misuse of an official / verified account and should have the blue check mark removed.

You're supposed to be dead! pic.twitter.com/LMoihD03pu

Check Out: 24 Captain Marvel Memes to Enjoy on Opening Weekend

First thought of mine as well. pic.twitter.com/KnHshjT9YA

> using a dead man to promote a movie pic.twitter.com/WH9ZP9t1vc

Hopefully Marvel will officially retire Stan's account in the near future... or atleast refrain from using it at least, especially for shameless promotion. 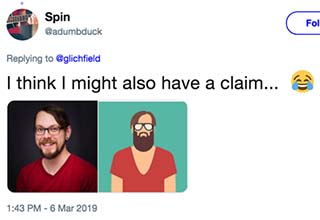