A prominent Mexican meteorologist is garnering attention for a series of all-caps Facebook posts, describing the appearance of a "mysterious metallic orb" that reportedly fell from the sky and landed in a tree in Veracruz, Mexico. 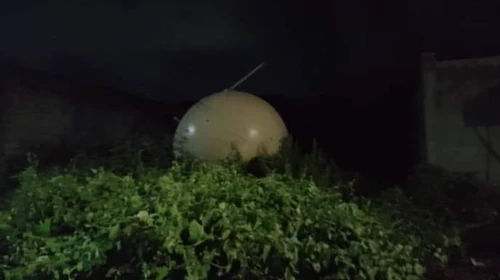 The only known photo of the device.

The object, according to famous meteorologist Isidro Cano Luna, is seamless and seems to be made of hard plastic or a mixture of metal alloys and oddly enough sports an antenna.

Luna speculated that the orb may contain "valuable information" and, somehow, that the device contains a "timing mechanism" that will open the orb at a specified time.

“ON THE OUTSIDE OF THE SPHERE THERE IS A CODE, BUT NO HOLE OR SLIT THROUGH WHICH IT COULD BE OPENED …. THESE SPHERES HAVE A TIMING MECHANISM THAT, AT A CERTAIN TIME THEY OPEN BY THEMSELVES AND SHOW THE VALUABLE INFORMATION THEY HAVE INSIDE.” 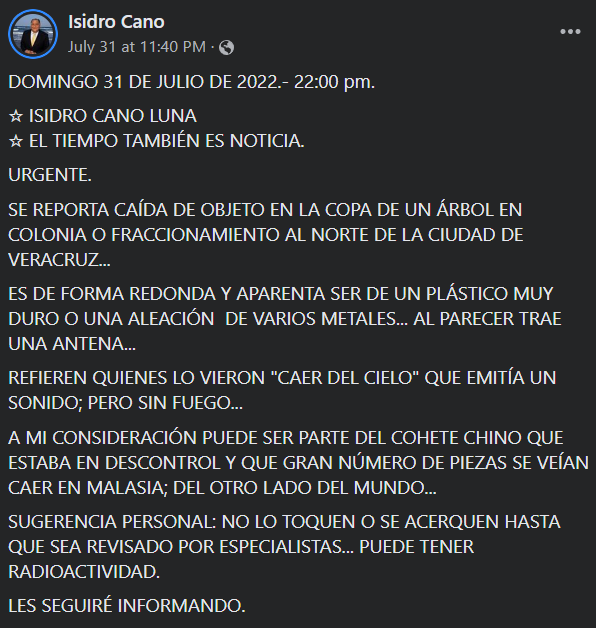 Luna was, apparently, not there when it crashed but, speaking to those who were, learned that the orb "emitted sound" but "but no fire" and urged residents of the neighborhood to avoid close contact with the orb.

“PERSONAL SUGGESTION: DO NOT TOUCH IT OR GET CLOSE TO IT UNTIL IT IS REVIEWED BY SPECIALISTS…IT MAY BE RADIOACTIVE.”

In later posts, Luna then called on the Mexican Navy to collect and study the orb.

“FOLLOWING UP ON THE METALLIC SPHERE THAT FELL ON TOP OF A TREE,” Luna wrote. “IT SHOULD NOT BE OPENED OR TRIED TO BE OPENED. A SPECIALIZED TEAM AT THE SECRETARY OF THE NAVY OF MEXICO AND/OR THE SECRETARY OF NATIONAL DEFENSE NEEDS TO COLLECT IT AND TURN IT IN FOR SPECIAL STUDY.”

Mr. Luna is something of a minor celebrity in his neck of the woods in Mexico, serving as a well-known meteorologist for decades known for his catchphrase "Weather is also news!"

Luna does not, skimming through his public persona, appear to have any previous association with UFOs and this latest string of FB posts seems to be his first foray into the subject.

Though the story has been picked up by several smaller publications and lit several UFO forums on fire, there hasn't been any major traction on major news outlets. Which is, perhaps, a little surprising, considering the sheer amount of debris that fell to the earth in recent weeks.

Further details about the story have been scarce, and the true nature of the "orb" remains unknown. Some online have speculated it could be a part from a weather balloon or a space rocket. Others, of course, assert it is extraterrestrial in origin.

Luna's last comment on the story describes the orb as being "taken away" by "highly trained personnel with specialized equipment."

“THE DEVICE WAS REMOVED AT 3:15 AM BY HIGHLY TRAINED PERSONNEL WITH SPECIALIZED EQUIPMENT TAKING ALL THE PRECAUTIONS AND FOLLOWING AL THE PROTOCOLS THAT THE CASE REQUIRED,” He said. "THE OBJECT IS NO LONGER IN THE STATE OF VERACRUZ AND ITS FINAL DESTINATION WILL BE BEYOND OUR BORDERS … WILL THE AUTHORITIES SAY THAT THIS WAS A JOKE OR FAKE NEWS? … NATIONAL SECURITY ISSUE: CLOSED.”