Perez Hilton, known to many as the first-ever internet influencer, has been stirring drama up again, this time on TikTok. Perez began late December discussing in his videos drama of 15-year-old TikTok Queen Charli D'Amelio and boyfriend Lil Huddy's relationship, which caused many to question why a 42-year-old man is even watching their videos.

The TikTok community did not like Perez at all. And when he commented on a video of Charli D'Amelio dancing in a swimsuit saying it was "inappropriate", Charli indirectly responded to him on her Twitter.

Perez kept going at the 15-yr-old's personal life, this time exposing her father's DUI while she was in the car.

This behavior continued for Perez interacting through comments with Charli and other kids on the app. This week, TikTokers began rallying around trying to ban Perez from TikTok with a Change.org petition.

Perez has been banned from commenting on others' TikTok videos, but is still able to make his own video. Here is more context:

It's really weird to me why an old shriveled up dude like Perez Hilton would care about the personal life of some TikTok girl he's never met. He's openly gay, so it's not an attractiveness thing; I'm kinda baffled as to why he even cares. Also, why do I even care? 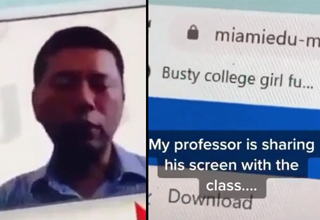 NEXT ARTICLE Professor's Career Gets Taken out by a Single TikTok