Time travel has long been a topic of sci-fi stories, movies, television, novels, discussions, and more. Have you ever thought about if you could travel to the past or the future, what you would do?  Perhaps you'd invest in some big tech giant like Google or Facebook before they blew up. Maybe you'd fix a mistake in your past that haunts you, or try and change something tragic that happened. Unfortunately, scientists largely agree that only one form of time travel is possible... time travel to the future.

What about traveling to the future? More than 100 years ago, Albert Einstein discovered that time travel is possible in the sense of accelerating time to "travel" into the future. Einstein proposed you could build a spaceship, go out into space near the speed of light, turn around, and come back. While the amount of time you spent in space would be normal or regular, the time that would have passed on Earth could be exponentially different, depending on your speed.

For example, if you were to fly for six months, turn around, and come back (for six months) you will obviously be one year older, but time is elapsing much slower for you than it is passing back on Earth. So as you return to Earth a year older the Earth may have gone through 1,000, 10,000, 100,000, or even a million years depending on how close to the speed of light you traveled.

Currently, the highest speeds achieved through any human technology was done with the Large Hadron Collider. Accelerating Protons to 99.9999991% of the speed of light, one second for the proton is equivalent to 27,777,778 seconds, or about 11 months, for us.

So while making an appearance in the past is mostly impossible, in theory, you could still travel to the future. In reality, it isn't all that bad because if you were going to the past to fix something you mucked up, it's highly unlikely you'd get it right the second time, not to mention any ripple effects or changes what you did could have on the "new" future you created. 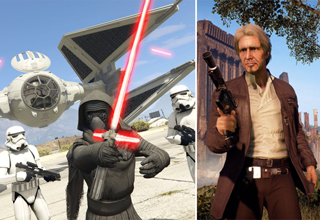 NEXT ARTICLE What Will the Open World 'Star Wars' Video Game Be Like?