Kodak Black had himself an eventful night at the Florida Panthers NHL game. The rapper was spotted and filmed by fans at the other side of the arena (impressive.)

Kodak was in a luxury box with fellow artist, Essence and to say that they were getting frisky would be an understatement.

I think Kodak found something better to do at the Panthers game pic.twitter.com/oZlUn06tt3

The twerk session quickly blew up on the internet. Leaving the NHL with no choice but to delete a previous tweet welcoming Kodak to the game.

Kodak Black was allegedly caught having sex at the Florida Panthers game today and it made NHL delete their tweet pic.twitter.com/kovEWbQXpT

However the internet was torn. Was the couple actually having sex? Or was this just your average, everyday, grind sesh? Let's take a closer look.

Kodak Black was not having sex @ a hockey game guys. Just a lil dancing. pic.twitter.com/iyRUO0UsEM

We'll let you be the judge, but it looks pretty clear to me. Either way, Twitter hadn't even begun to feast yet.

kodak black walked in......looked around the arena.. felt the atmosphere and was like "i can fuck in here".

the people that were vibing to the music underneath kodak black when they finally see the video: pic.twitter.com/5HRxgP3ftz

Gary Bettman, the NHL's commissioner was going to hear about this one way or another.

My dream job is "NHL employee who was tasked with calling Gary Bettman to explain the Kodak Black Incident,"

Then the puns rolled in.

"gotta get it in deep"

After all was said and done, Florida ended up getting the win. I'd like to think it was mostly due to Kodak Black's tenacity and hard work as a Panthers' fan.

Kodak Black doing more to the grow the nhl more than anyone has all decade. 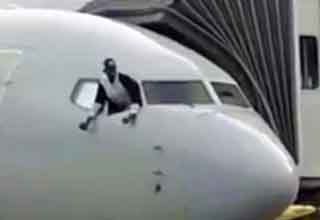