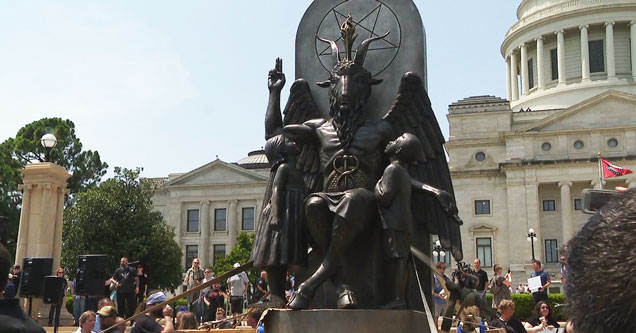 An 8 foot tall Baphomet statue was briefly erected today outside the state capital in Little Rock, Arkansas, during a rally held by the Satanic Temple after the Arkansas legislature approved the placement of a Ten Commandments statue on the Capitol grounds.

The Satanic Temple is arguing that the Ten Commandments statue violates their constitutional freedom of religious rights and that by installing their statue, the statue will be demonstrating religious equality under the law.

The Satanic Temple, which does not actually believe in the devil or Satan but describes it's members as "skeptical atheists", filed a lawsuit with the Arkansas legislature to have their statue included in observance of the First Amendment and religious pluralism.

NOW: The Satanic Temple is rallying around their Baphomet statue at the Arkansas State Capitol. #arnews #arpx pic.twitter.com/AgO4CESKMq

These guys tell me they’re “witnesses to Christianity” not here to support or rally against the Satanic Temple rally at the Arkansas State Capitol. #arnews #arpx @KATVNews pic.twitter.com/rsTi3MGJ6Z

Is anyone as shocked and in joyful AWE as I am in regards to of what's happening right now in Arkansas?

Lucien Greaves, co-founder of the Satanic Temple, spoke at the Baphomet unveiling thanking state Senator Jason Rapert for allowing the Ten Commandments monument, arguing that that move ensured the fair and balanced representation of Baphomet and Satan on the Arkansas capital grounds.

Below is the transcript of Lucien Greaves speech at the unveiling:

Good People of Arkansas and supporters of religious liberty, I present to you Baphomet, the symbol of pluralism, legal equality, tolerance, free inquiry, freedom of conscience, and reconciliation.

We did not bring Baphomet in hopes of replacing the Ten Commandments monument. It is not the purpose of our monument or our efforts to erect this monument to impune or silence the beliefs of others. Despite what you have probably heard the truth is the Satanic Temple never asked for the Ten Commandments monument to be taken down. Nor do we ask that Baphomet be erected to the exclusion of any other monuments of religious significance. In fact, from the beginning we were clear: We only want our monument on public grounds where other monuments of religious significance are preexisting. We have as little interest in forcing our beliefs and symbols upon you, as we do in having the beliefs and views of others forced upon us.

What we are asking for is only that the public square, these capital grounds, remain an area in which free speech, religious liberty, and equality under the law be respected by the holders of public office who swore to uphold those values.

This is an opportunity for us to stand together whatever the differences amongst ourselves and stand up for the principles that allow for a free exchange of ideas and the free exercise of religious convictions.

It has been said that there is no greater tyranny that which is perpetrated under the law and in the name of justice. And I can tell you that among legally sanctioned tyrannies, none is greater that which would deny the liberty to freely one’s own conscience. To reach one’s own determination of one’s religious convictions. That would deny one the self-determination to stand up for, with equal voice, ones deeply held beliefs. Conviction enforced by coercion is subjugation.

It has also been said that when tyranny comes to America it will be wrapped in the flag and carrying a cross. This is because the tyrant knows that through fear he can manipulate a people away from their principals, so long as he appropriates the proper symbols, repeats the appropriate soundbites and claims to represent a purer form of the values that he manipulates and forms, and ultimately inverts.

Arkansas state Sen. Jason Rapert took to Facebook to voice his opinion and opposition to the Baphomet statue. Here's the gist of it:

Our rights to build a monument were exercised through the electoral and legislative processes and have been upheld by the judicial system. They are no less sacred than the freedoms of a shrill few, for whom legal and political rights are merely methods to fleece the gullible and entertain the cynical.

No matter what these extremists may claim, it will be a very cold day in hell before an offensive statue will be forced upon us to be permanently erected on the grounds of the Arkansas State Capitol.

What some will surely see as an affront to good taste and decency, others will see as the front lines of what they view as the fight against the blurring of the lines separating Church and State. 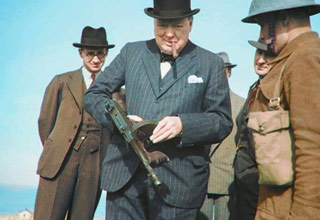