Earlier this week, American Idol alum Simon Cowell boldly went where no television judge has gone before, bravely asking the question “what if the 2000s were just a collective hallucination projected onto a big pile of wax” in a new clip for Britain’s Got Talent.

On Thursday, December 1, the notoriously harsh judge sparked social media concern after appearing eerily … smooth … in a video encouraging performers to audition for the latest season of the long-running talent program.

“I always say on this show, two or three minutes can change your life, and it has. And maybe this time it’s gonna be you,” quipped an, erm, shiny Cowell in the now-notorious since-deleted clip.

What in the world happened to Simon Cowell in his most recent video yesterday, he looks absolutely NOTHING like himself!?! pic.twitter.com/EtP6GhopVy

“So please audition now for next year’s season and I look forward to meeting you,” he continued with as much gusto as one with an entire cosmetic surgeon’s office of Botox could possibly express.

Yet it seems his stark smoothness  — an appearance akin to the ocean under the moon, as Rob Thomas of Matchbox 20 once famously put it — sparked concern among fans, prompting several Twitter detectives to sound off on his taut appearance.

“Simon Cowell looks like he's skinned someone alive and is wearing their face,” joked one fan.

Simon Cowell looks like he's skinned someone alive and is wearing their face pic.twitter.com/vesm0MBz5O

“Simon Cowell's face looks like if George Michael's corpse was a playable character in Goldeneye,” added another.

Even Domino’s UK got in on the fun, hitting Cowell — much like their pizzas — with a sick burn.

When you get a Simon Cowell from the freezer pic.twitter.com/41G72XjIQO

“When you get a Simon Cowell from the freezer,” they quipped alongside a screengrab of the since-bygone clip.

The video comes months after Cowell, 63, got candid about hitting the med spa a little too often, alleging that he had quit his injectable substance of choice — Botox — upon realizing he resembled “something out of a horror film.”

Thoughts with Simon Cowell who can no longer unlock his phone pic.twitter.com/pn77UlIPQ6

“There was a phase where everyone was having their faces pumped full of this and the other,” Cowell explained while attending the United States’ premier plastic surgery exhibition — the 2022 Kid’s Choice Awards. “There was a stage where I might have gone a bit too far. I saw a picture of me from ‘before’ the other day, and didn’t recognize it as me first of all.” 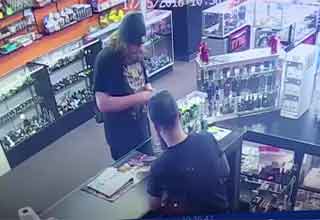