After four years of waiting, the FIFA World Cup is finally back. 32 teams from around the globe have gathered in Qatar this year to duke it out in pursuit of first prize. The very first match between Ecuador and Qatar, who represents their country with a home-field advantage, saw lots of energy and plenty of tension.

A video went viral of this Ecuadorian fan taunting Qatar fans for all the corruption allegations surrounding this year’s tournament. He rubs his fingers together, insinuating Qatar has bought the match – quite a ballsy move to pull in Qatar of all countries, where freedom of expression is highly restricted.

One Qatari fan gets particularly heated and yells at the man to shut up and sit down. He starts up but his friends hold him back. The clip ends with tensions high.

The Ecuador and Qatar fan who went viral cleared their differences at half time #FIFAWorldCup pic.twitter.com/moKUflvlNo

And then, in a twist of fate, a shocking sequel to this exchange graced the internet. We see the Qatari and Ecuadorian fans who had just been beefing sitting side by side, hand-in-hand, as they preach a friendship. A shared love of the game has brought them together. And they didn’t even need any beer.

But some of the online community thought this message of peace felt a bit awkward. Some speculated it was fabricated altogether. An edited version started floating around on Twitter, doubling down on the Qatari corruption convo with a pretty clever joke. 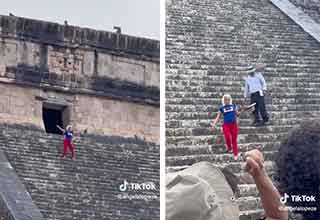