Alyson Tabbitha is a monolith in the cosplay community. Even if you aren't a fan of cosplay, you've undoubtedly seen her work as you've wandered through the internet.

Tabbitha started doing cosplay professionally back in 2014 and has since amassed an Instagram following of over 974k followers, and her Youtube channel (which posts tutorials of her work) has 186k subscribers.

Here's a list of some of our favorite looks that Alyson Tabbitha has cosplayed.

" Is there Life on Mars? " . My #DavidBowie Cosplay from the "Life on Mars" music video! Full Suit, wig & makeup, Made/Done by me! Makeup from: @surrealmakeup . I am well aware my music video cosplays are not my most popular but I don't care cause music is such a big part of my life & was my biggest artistic inspiration (along with movies) during adolescence. I have a longggg list of music video cosplays I plan to do, & will keep making them because they are so much fun! . Yeah, it's really cool when a lot of people recognize who you're being at a con/online but to me what's also really cool is dressing up as a character that is special to you no matter how little/or/many other people know who you are! It always makes me all giggly and fell warm & fuzzy inside (swipe to see it in action ) . Remember friends, #cosplay isn't a popularity or look alike contest. Just cosplay in a way that brings you the most joy! I love being able to dress up as the characters I love to the best of my own abilities. I also enjoy other things like the crafting process, photoshoots & making new friends with similar interest! What's your favorite part about cosplaying? . . . #musicvideo #davidbowiecosplay #davidbowiecostume #lifeonmars @davidbowie #ziggystardust #aladdinsane

I.... am.... Ironman. . NEW MAKEUP TEST!!! Makeup & wig done/worn by me!! . ??The Spoiler Ban was lifted! While I am trying to keep post vague, READ COMMENTS AT YOUR OWN RISK!?? . I had so much fun doing this makeup! I never thought I could pull this look off, & while it's not perfect since I don't naturally look like @robertdowneyjr lol, I didn't care cause I appreciate his character so much in #Endgame ! I really enjoyed pushing myself & trying something new!!! . Swipe for Bonus pic! . . . #Marvel @marvel #tonystark #tonystarkcosplay #avengersendgame #avengers #makeuptransformation #makeuptest #ironman #ironmancosplay

4. Nebula (Guardians of the Galaxy, Avengers)

Me after seeing @Avengers #Endgame . *No Spoilers! I will do my best to monitor comments, but I can't guarantee comments will be spoiler free, so read them at your own risk!* . WOW. I thought I was ready, I wasn't. I went in with surreal high expectations for this movie, & they were exceeded. I thought I watched so many fan theory videos I would have a good idea of what to expect. lol I didn't. My eyes were swelling & wet the entire move from the constant laughing and crying. I just want to go watch it again. I could talk for hours about what I saw last night & how incredible the movie was. But I will patiently wait for more people to have a chance to see it. & keep post spoiler free so you can experience the movie in all it's glory. . Thank you @Marvel for giving us this experience. . . . . #marvel #marvelcosplay #Nebula #NebulaCosplay #AvengersEndgame #Avengers #Avengerscosplay #dontspoiltheendgame

Throw back to one of my favorite photos of my #EdwardScissorhands Cosplay! Photo by the amazing @davidlovephotog . The entire costume/ makeup / wig made/done by me! ( @AlysonTabbitha ) . I restocked the resin moon belt buckle kits on my site, and the tutorials for the makeup, scissorhands, full costume and wig are all on my channel so you can learn how I did it! . To this day, this is one of my most proud creations! I didn't spend much money, and though I did spend tons of time on it, I somehow got it done in 2 weeks! I made the pattern for everything myself. Almost every stud and buckle was had sculpted and resin cast. Lots of hand stitching and tons of little details! The Scissorhand props were a big experiment and I'm so happy with how they turned out! (mostly made out of popsicle sticks and poster board! xD) What cosplay that you made are you most proud of?? . . . #edwardscissorhandscosplay #crossplay #makeuptransformation #cosplaytutorial #pug #pugcostumes #halloween #halloweencostume #timburtoncosplay

A photo of my Edward Scissorhands Cosplay that I never posted! . I made everything down to the Patterns, all from scratch! It was a lot of work, but it's been one of my favorite costumes I've ever made! & one of my favorite most relatable characters ! . I do have tutorials for the Makeup / Wig / Full costume / Scissorhand Prop all on my YT Channel - Alyson Tabbitha . I also have the scissorhand template & resin belt buckles posted on my site! :) . . . #edwardscissorhands #edwardscissorhandscosplay #timburton #timburtoncosplay #johnnydepp #scissorhands #cosplay #makeuptransformation #cosplaytutorial #cosplaytransformation

Bonus: Watch the video of Alyson Tabbitha transforming herself into Edward Scissorhands.

You remind me of the babe! A goblin babe! . Jareth makeup / wig / costume, done/worn by me! ( @AlysonTabbitha ) . I'LL BE WEARING THIS COSTUME IN DECEMBER TO @holidaymatsuri !!!! WHO'S GOING??? . Makeup from @surrealmakeup This is definitively my favorite photos I got of the makeup test! If Nugget in a onsie isn't the cutest thing ever I don't know what is! . . . @labyrinthmovie1986 #jareth #jarethcosplay #labyrinthcosplay #labyrinth #pug #pugcostume #goblinking #goblinkingcosplay #davidbowie #davidbowiecostume #dogcostume f

My #LaraCroft #TombRaider Before and After Transformation! This is based off of the Angelina Jolie version from the movies! :) . Makeup / Hair / & Costume all done by me! ~ @AlysonTabbitha . Oh man, when I put this costume on, I didn't really think it was much of a transformation, but seeing it side by side like this, really makes me proud! You can even see my attitude changes! lol More "natural" maleup looks are always so much harder to make yourself look different cause there's less dramatic makeup to hide behind! . I love this costume so much, it's one of my favorites to wear to a con, cause I feel like a badass, it's comfy, I can move around, also easy to pack! lol I'll just have to glue the props back together because them and a bunch of my other props (like my widowmaker prop) broke apart when I prop rack fell. -_- . . ?ALSO >inb4 creepy or gross comments about boobs< For any women or male cross-players interested in having an exaggerate chest for certain characters, that look like braless tiddy, I used drag queen titties from ebay! :) I cut them apart & put them in a sports bra! I have a full post about it for patrons. It's like a padded bra but instead of pushing them up & together, they hang & slope! Most of my friends have tried them on when they've visted xD they are lots of fun at parties! LOL But I'm very happy to take them off afterward! xD Hope this might help someone who wants temporary exaggerated proportions for cosplay! Question answered! Any inappropriate or rude comments get you blocked! Don't be that guy . . . #laracroftcosplay #tombraidercosplay #angelinajolie #makeuptransformation #beforeandafter #cosplaytransformation #inandoutofcosplay

8. Newt Scamander (Fantastic Beasts and Where to Find Them, 2016)

<<< Swipe to see excitement OH MY GOSH GUYS WOW I KNOW I'M LATE BUT OMG the new " #CrimesofGrindelwald " trailer got me SHOOK! I love seeing all the new characters and can't wait to watch the movie!! I want to cosplay another character from it, who do you think?? . #NewtScamander cosplay by me! Coat borrowed from @lexiegracelove . Photo taken by @madi.kat . #fantasticbeasts #fantasticbeastscosplay #newtcosplay #newtscamandercosplay

Full costume, makeup, wig, made & worn by me~ @AlysonTabbitha Hey guys! Who's going to @holidaymatsuri in Dec?? I'm so excited!! this will be my 3rd year going & it's such a great con experience every time! . I might bring my #JackSparrow costume out of storage for #HolMat2017 if enough people wanna see it! . I have also been working on remaking my classic #widowmaker skin costume for holmat, cause I want it to be more accurate! I also plan to finish #wonderwoman if I have enough time!! (If I don't wear jack I'll probably bring #Lestat again, cause that was lots of fun last year, and I don't get many other chances to wear him due to the weather ! If you are going to #Holidaymatsuri, let me know your thoughts! . Otherwise just enjoy this pic of my #JackSparrowCosplay ! . . . #piratesofthecaribbean #potc #potccosplay #jacksparrow #crossplay #jacksparrowcrossplay #piratecosplay #cosplayer #alysontabbitha #johnnydepp #johnnydeppcosplay #makeuptransformation #captinjacksparrow #captainjacksparrow

Bonus: Alyson Tabbitha does a tutorial on how she did the Jack Sparrow makeup.

I did a #WonderWoman makeup test, that turned into a full dress rehearsal that resulted in this!! . Full costume, makeup & hair done by me! ( @AlysonTabbitha ) :) . The costume isn't finished yet, since I still need to make the belts, shoes lasso , and props! But I was so exited I couldn't resist trying it on! lol . I made the armor out of craft foam and poster board, & the base of the breastplate was made out of @TreeFlx ! I definitely leared a lot of new skills while making this! . Once I saw the Wonder Woman movie I stopped all other projects to prioritize this cause I was so inspired! lol . (Shout out to my @pugliepug phone sicker ) . #wonderwomancostume #wonderwomancosplay #galgadot #galgadotcosplay #justiceleaguecosplay #justiceleague #cosplayer #cosplaytransformation #cosplaymakeup #ww #wwcosplay #makeuptransformation #beforeandafter #bathroomselfie #beforeamdaftercosplay #inandoutcosplay #jlhalloween #halloween

I FINISHED My Talon #WidowmakerCosplay !!! Now ready to wear to @akon_convention this weekend! & @cosplacon next weekend!! ^_^ I AM SO EXCITED TO SEE EVERYONE AT MORE CONS!! <3 So happy this is finished I almost thought I wouldn't have it done before the cons! I have been working on it non-stop for a week! I feel like I keep picking costumes that I think look easy-ish to me and they end up being harder than the last. xD It's fine cause I keep learning new techniques but it can be stressful at times! I have to give a huge shoutout & Thank you to @FunkyEyesLenses for helping me get replacement lenses within hours (since I accidentally ripped my original! Very happy with the quality and customer service!!) Also to my 3 angels @indra_rojas @itslisalouwho & @morganlefoy for helping me con-crunch little finishing details, it makes this costume even more special to me! <3 . Also all the fabrics used for this costume were from the @cosplayfabrics @yayahan fabric line sold @joann_stores ! SO HYPEEEEE! I will be wearing it Saturday at both cons if you wanna do Overwatch cos-group things with me! :) . . #overwatchcosplay #overwatch #talonwidowmakercosplay #cosplaytransformation #beforeandaftercosplay #beforeandafter #talonwidowmaker #blizzardgames #blizzardcosplay #overwatchwidowmaker #inandoutofcosplay

Bonus: Alyson Tabbitha teaches you how to do the Widowmaker makeup.

If you want to see more, head over to her instagram: @alysontabbitha 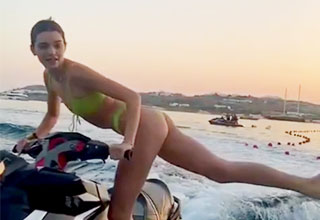