There are only two types of men in this world, or that's what 4chan would have you believe. You can either be a sex-less virgin loser, who walks without confidence and wears dark colors to blend into crowds, or you can be Chad Thundercock, a himbo-esque man who gets laid more than he deserves and lives life on his own terms.

So in honor of doing some soul searching, we're taking the time to explain what exactly the Chad meme is, where he came from and where he's going. 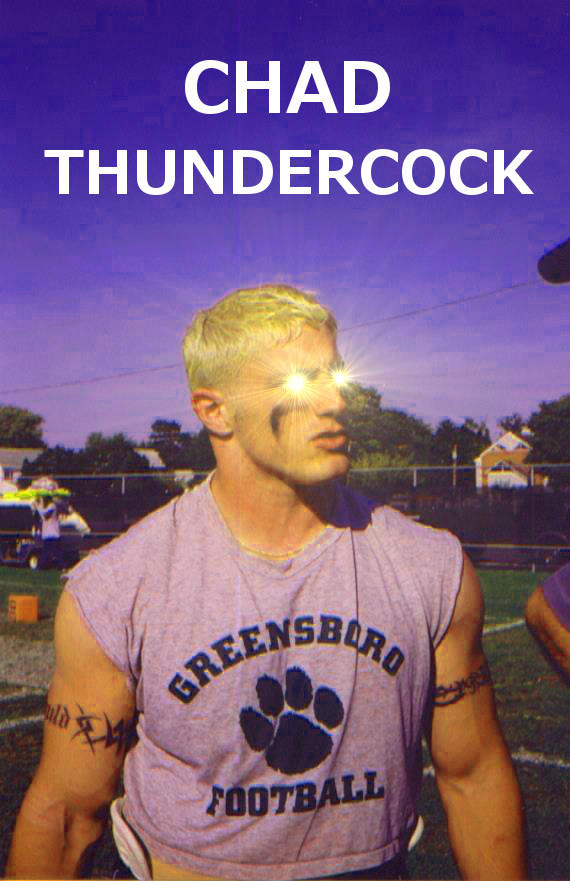 Where did the Chad meme come from?

The origin of the Chad meme isn't that glorious and can be traced to the hairy drain of the internet, a little site known as 4chan, specifically the RK9 board (robot9000).

The origin of the term Chad, as it refers to macho dudes who pump iron and walk around with their asses on their fronts, predates its usage online by nearly a decade. In the late 1990s, the term had already been synonymous with 'bro culture' in subgroups outside the Chicago area, and in 2006 received its first entry on Urban Dictionary, used to describe men who, "go (sic) to the bar to pick up chicks."

However, it wasn't until 2013, when the term Chad Thundercock was coined by an Urban Dictionary user, who posted an entry describing Chads as college-aged men who identify as "alpha males."

How did the Chad Meme spread and evolve?

The rise of the Chad meme coincided with the rise of the incel community. Incels, or rather men who labeled themself as such, were self-appointed virgins who dubbed themselves "involuntary celibates" and saw themselves in a spiritual war with their more successful Chad counterparts.

In 2015, a number of Tumblr pages and Subreddits began to capitalize on the success of the meme, oftentimes posting to boards like r/foreveralone and r/justneckbeardthings, usually bemoaning how little interest they received from women.

But it wasn't until 2017, when a Microsoft paint drawing appeared on 4chan's rk9 board depicting the Virgin and Chad together, that we had our first officially recognized Chad meme. 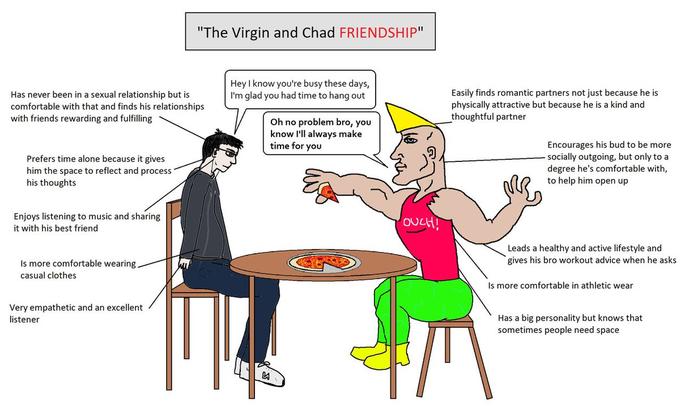 Who Created the Chad meme?

No one actually knows who created the first Chad meme, at least the first version of him that we are most familiar with, and while people have tried to claim ownership over the years, there is very little proof that can be offered to confirm who the real creator is. However, that doesn't stop people from trying.

Most recently, someone on Twitter posted a close-up of the Chad meme's head, next to a picture of the State of Chad, noticing a similarity between the two. And while someone claimed to have made them similar on purpose, it's impossible to know if that is the case.

I can't believe this? Is this allowed? pic.twitter.com/KCStLH52VP

hey! i was wondering when someone would notice this! i am the original creator of the "chad" picture. my roommate at the time was from chad so i designed the guy's head to be shaped like that as a tribute to my roommate. he has tried to sue me about this https://t.co/yGCnjcR5Tn

Where is the Chad meme now?

The Chad meme has inspired a number of other memes, most similar being the Yes Chad meme, the GigaChad meme, and most unsurprisingly Chad has become the face of an NFT movement like Cryptopunks, only there known as CryptoChads. 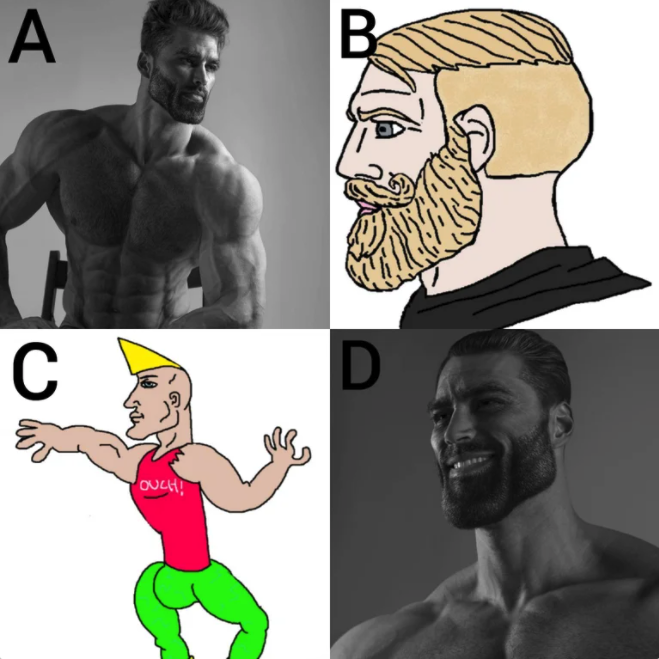 Who is the GigaChad?

A better question is, what is the GigaChad. Many people were tricked into believing that GigaChad was a real model with near-perfect facial structure. However, GigaChad is not a real person, but instead is a photoshopped character from Russian photographer Krista Sudmalis. 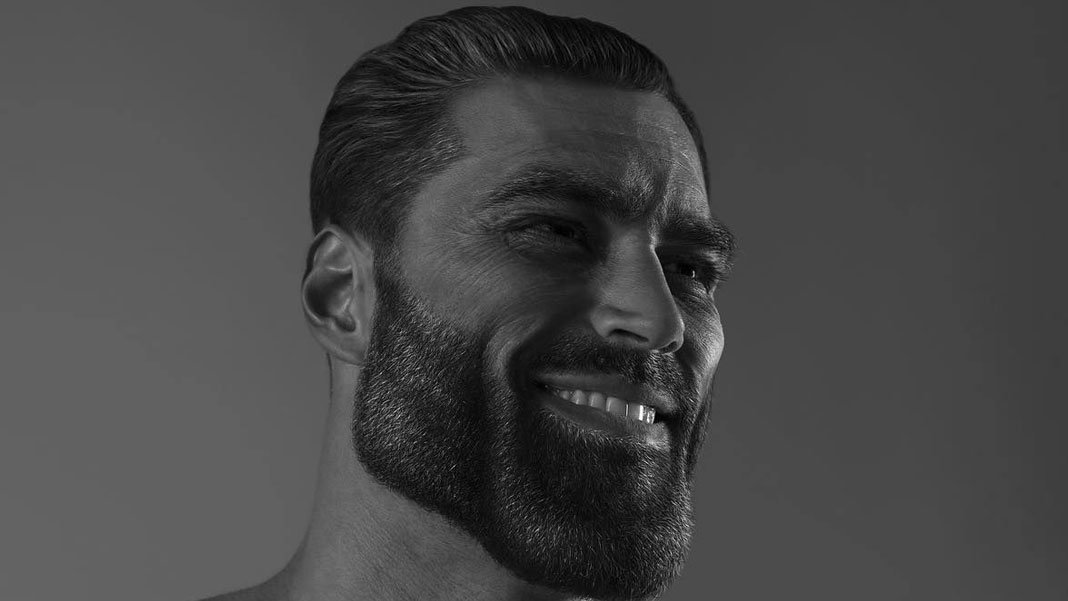 Who is Yes Chad?

Yes Chad, who is also called Nordic Gamer, and mistakenly referred to as No Chad, is an image of a man with blonde hair and blue eyes, who first appeared online in 2019. The Yes Chad meme is a modernized version of a Wojak, or a poorly drawn internet cartoon, which reimagines Chad as an easy-going and always winning man’s man. Other memes that came out around the same time as Yes Chad are, Trad Girl and soyjaks. 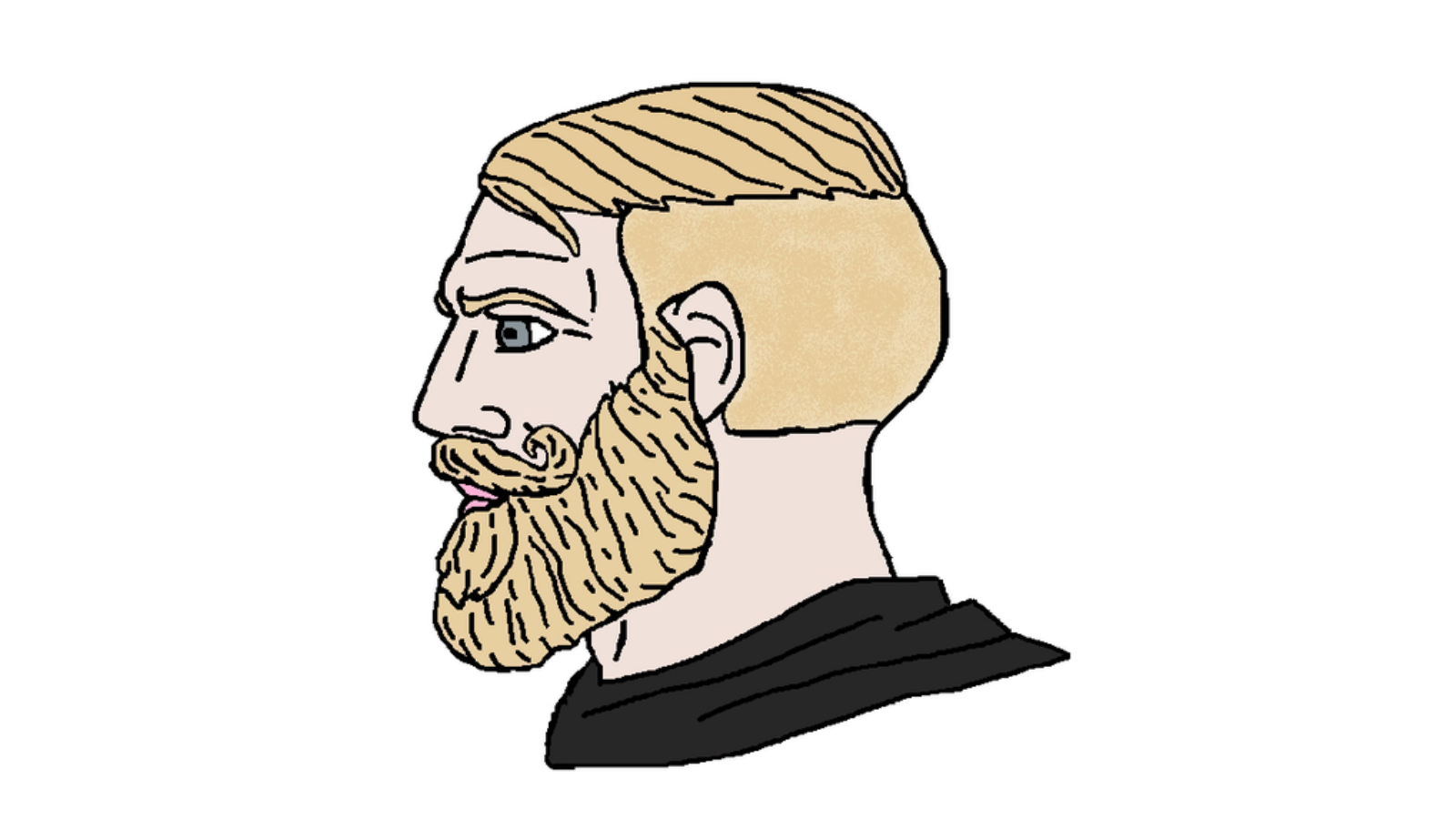 The Evolution of Virgin vs. Chad

Like most memes, the Chad meme and specifically the Virgin Vs Chad meme has evolved to mean a multitude of things. For example, instead of Virgins and Chads, the characters can be remade to signify any two opposing ideas. Like people who like fall vs people who don’t, or crypto enthusiasts versus Chad currency bros. The situations and attitudes that can be assigned to Chad are endless. This is why the Chad meme has stood the test of time, and why it has been remade so many times throughout the years. 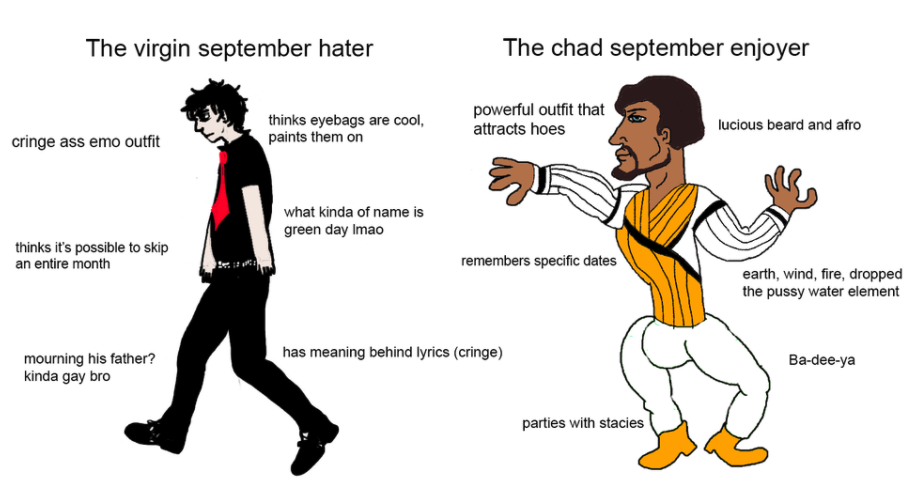 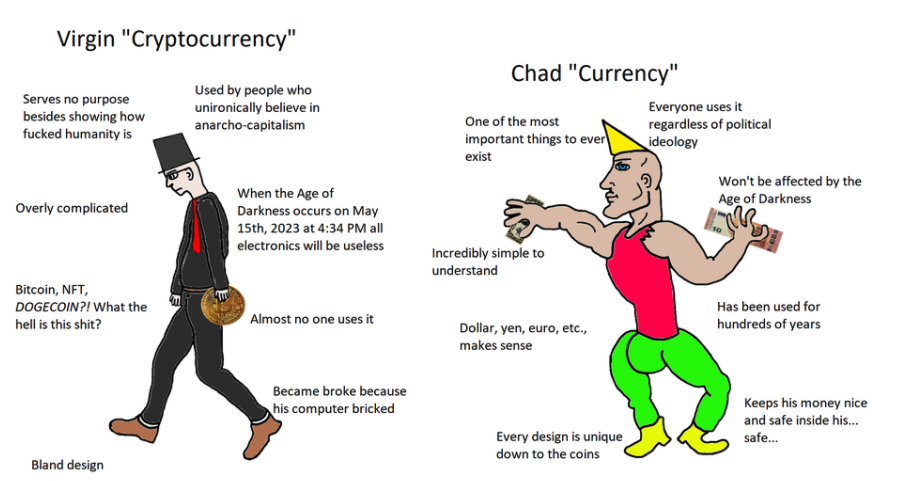 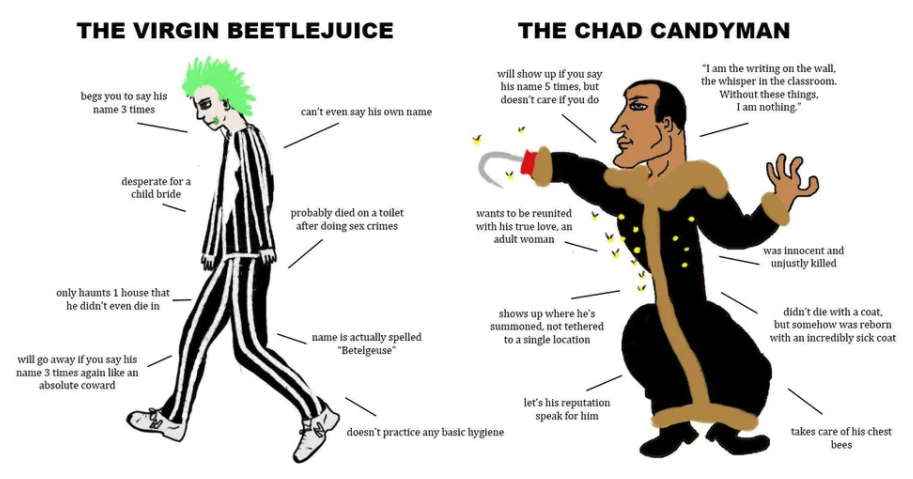 Now that you know all there is to know about the Chad meme, enjoy some Chad's in the wild, you've earned it. 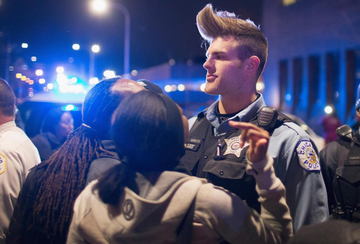 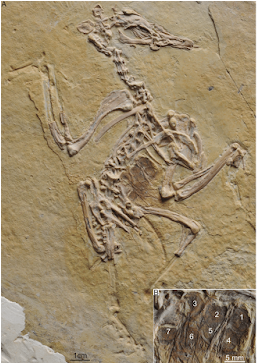 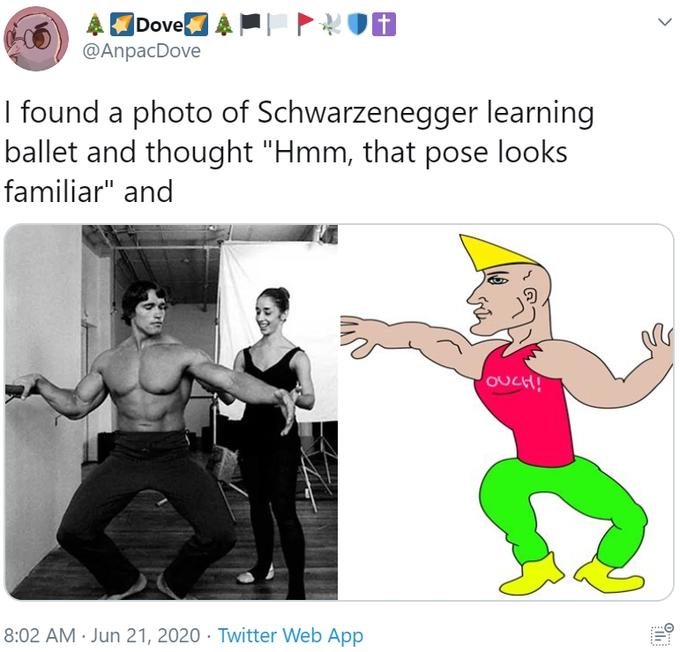 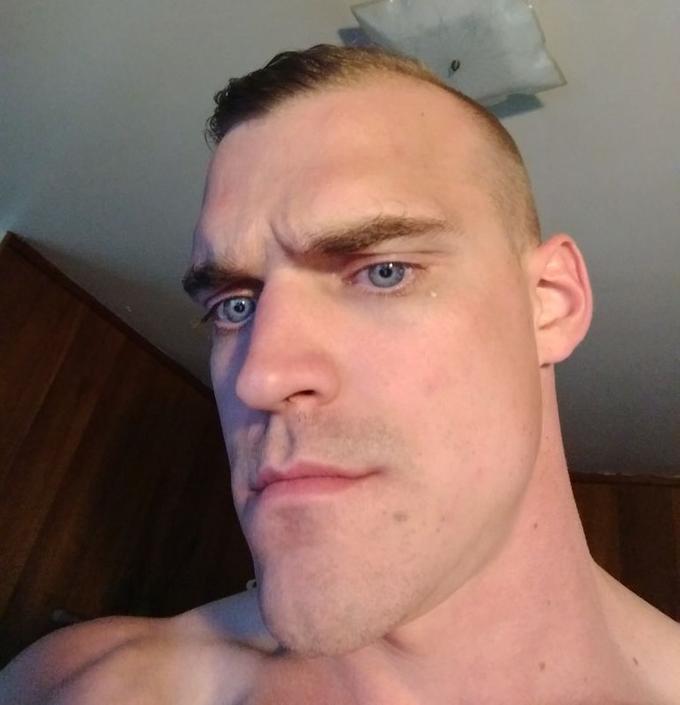 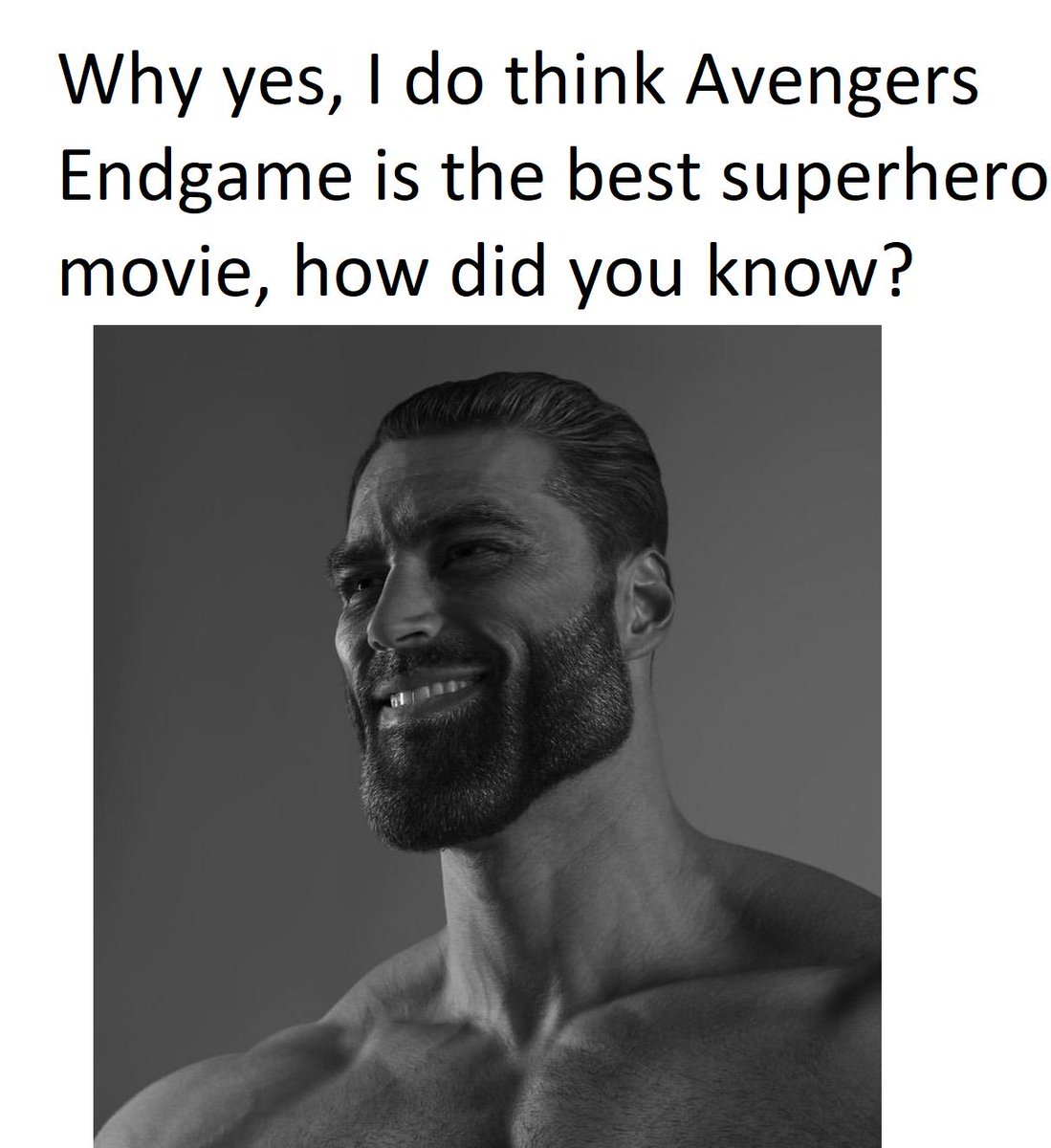 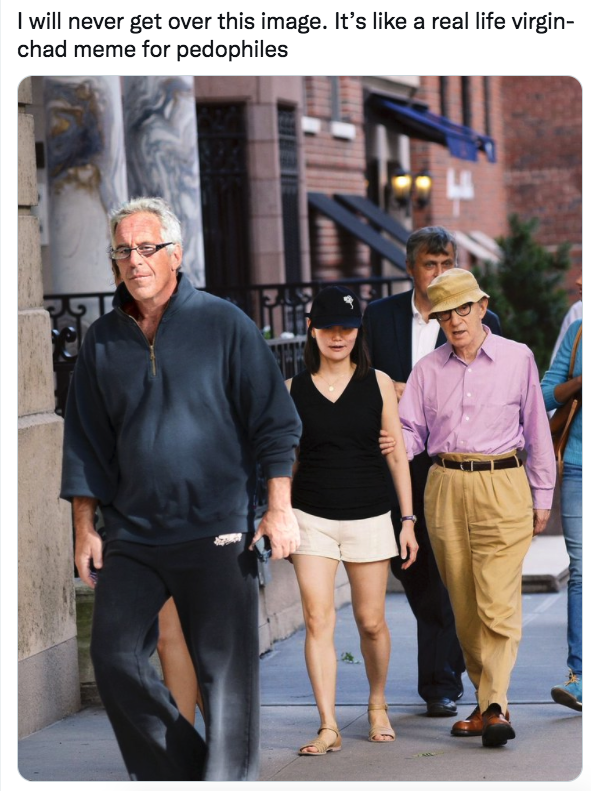 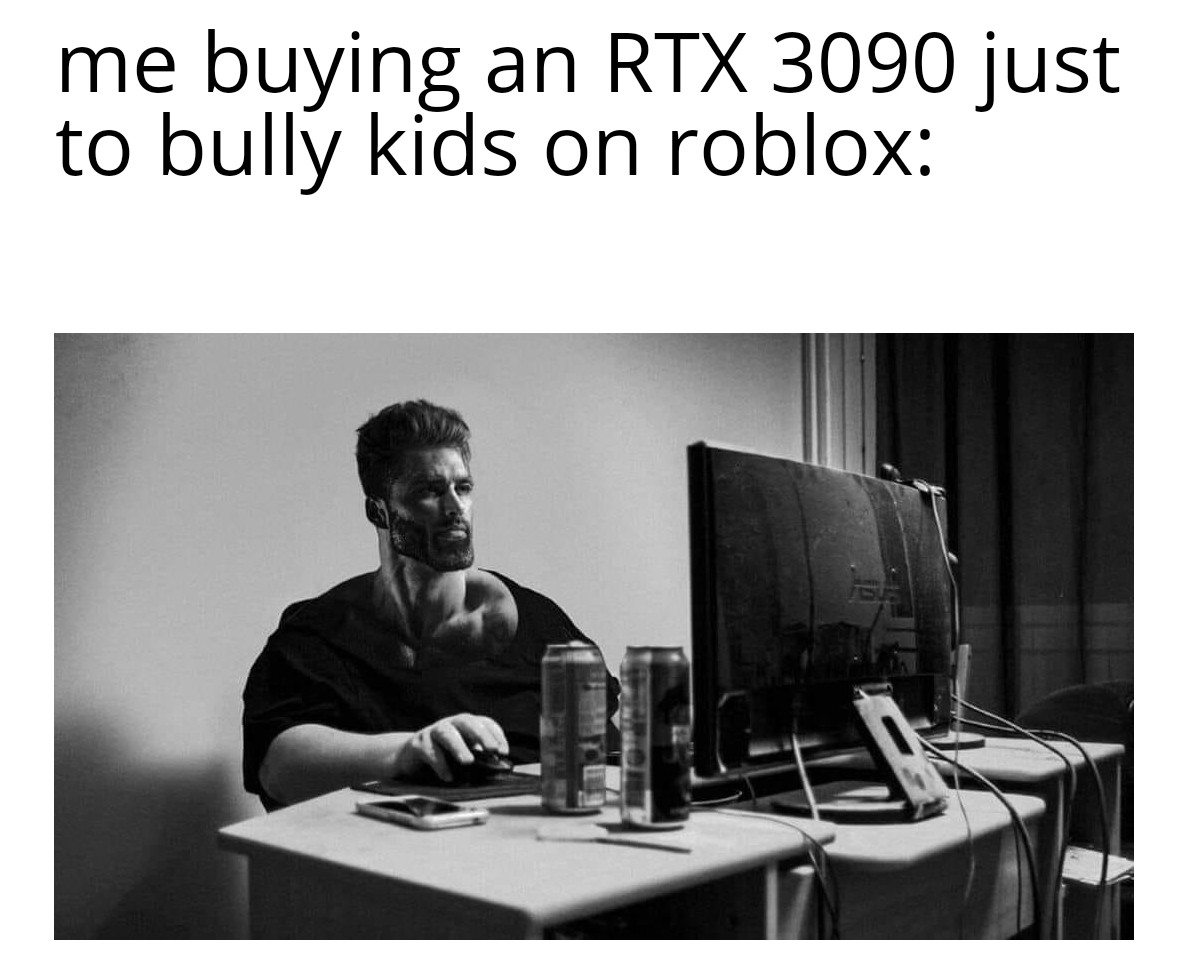 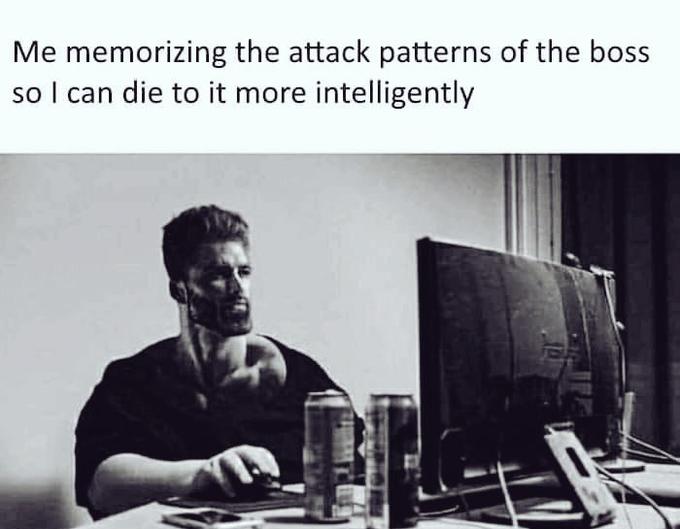 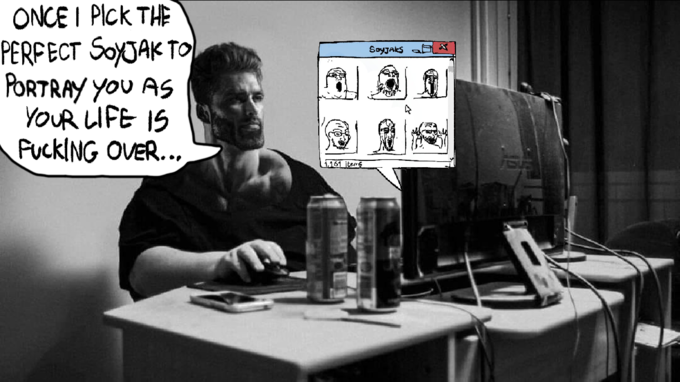 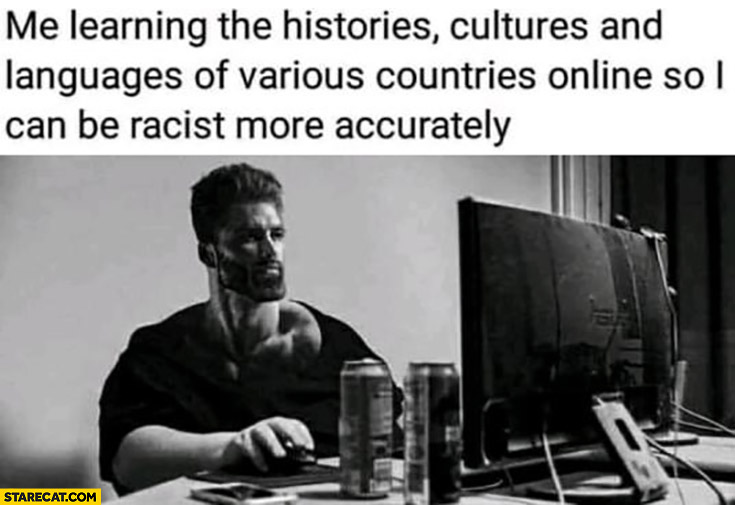 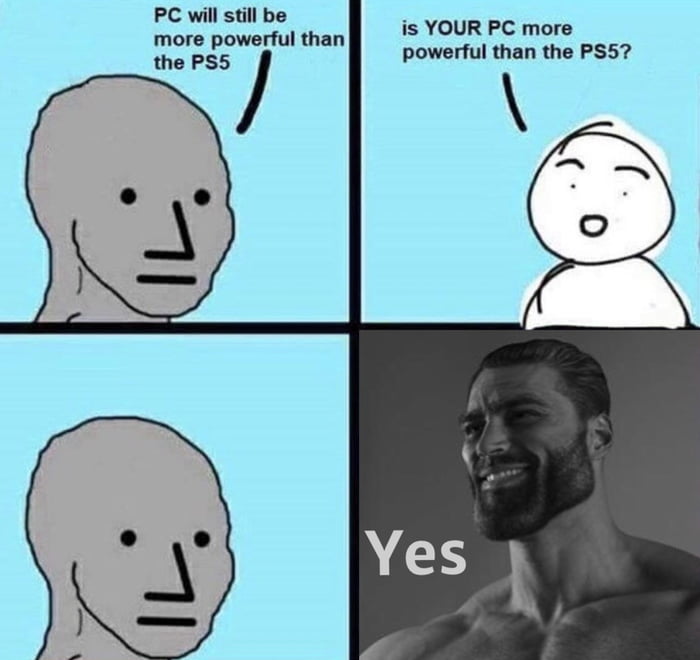 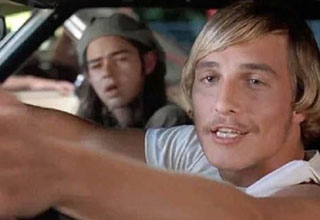