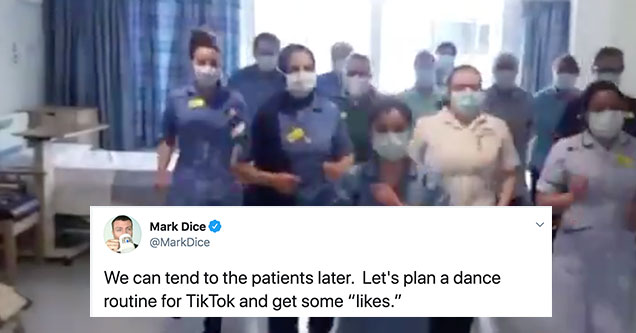 It seems like a valid question on the surface, but when you dig into it, the answers aren't as clear as you may believe. "Did nurses in China post dancing videos to their TikToks?"

What a sentence. Well, we don't know the answer, were sure some did yes, just considering the volume of people on the social media app. But what is that supposed to mean?

I’m one nurse tik tok dance away from believing this whole thing was fake.

Well it is a question imbued with duty and dedication to what is a very serious public health crisis, but even more so, it calls into question more than it answers. Needless to say, there are some big brained morons online who think videos of dancing nurses are proof that this 'Pandemic' is nothing but a overhyped, 'nothing burger'. Yes, people actually use that word in serious arguments, 'nothing burger'.

Maybe, just maybe these nurses, who are mostly in the United States are posting dancing videos because they need some cheering up. Or maybe they're doing it because they want to cheer you up. Not because nothing is going on and everything is a false flag to turn you into a gay crossbow shooting, environmentalist.

We were told we had to willingly plunge ourselves into a Great Depression because hospitals are being overwhelmed. Meanwhile, Tik Tok is full of videos of hospital staff performing choreographed dance routines. What a joke. This whole thing. Infuriating.

We can tend to the patients later. Let's plan a dance routine for TikTok and get some “likes.” pic.twitter.com/kRmc8RA0VH

#NHS Seems To Have Time On Its Hands#COVID2019 #coronavirus #Covid_19 #StayHome pic.twitter.com/iRuq2vL2F4

That is the reality of Hospitals in the USA right now, not the Warzones like the Media says.

I mean, just last week idiots around the country were sharing photos of the outsides of hospitals and their entry ways as proof of a 'gotcha' moment because some of them were emptier than people thought they should be.

Well, were sorry to tell ya, but the virus is serious and no, some dancing nurses are not proof that this is some false flag. Stupid that even have to say it. 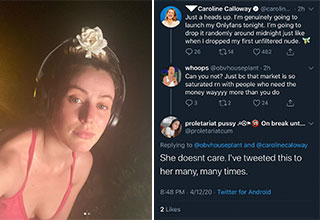 NEXT ARTICLE The 'Nudes Market' Has Officially Become Over Saturated