In the extreme polarity of the current political climate (shrouded in incivility and hostility), it seems logical that the next step to our (anti-)progressive division would be to segregate political parties into separate (but equal) dating apps. Introducing Trump(dot)Dating, the new fucksite for MAGA singles.

While dating apps such as OkCupid ask a multitude of specific personality questions from music taste to choking preferences to ensure your best possible match, Trump.Dating cuts the fat and gets straight to the chase. You MAGA? Then let's fuck.

"Find the America-first partner of your dreams," the web site touts. Inspired by the uptick in "No Trump supporters" disclaimers in Tinder bios nationwide, this company has provided a safe space for yellow dog Republicans to demonstrate their patriotism wearing nothing but their red caps.

Registration is free, with additional features such as the ability to message other users only available with membership pricing, and although the site's design only features photos of Caucasians, supposedly all colors of the rainbow are welcomed. But if we were to temporarily disable the cognitive mechanisms that enable us to shit ourselves, we could unanimously agree that the dating pool therein must be whiter than the wedding gowns of the chaste Christian women who use this service.

No homo. Despite Trump's campaign assertion that nobody loves gays more than him, the service only permits straight coupling. This has liberal media in an easy uproar, of course.

But no one seems to be considering the real oversight of this service: this isn't officially of the Trump brand.  While Trump loves his supporters, he's made much of his fortune by licensing his brand to third parties, and surely this site hasn't gone through the proper channels of acquiring official permissions.

And like any good "journalist" (lol) would do, I went undercover to see what the real skinny was. Upon my first log-in, I was amazed to discover actual black members (asians too!). I, perhaps incorrectly, had expected to see a much less diverse range of users. But upon further investigation and much to the sincere users' dismay, I immediately learned that the majority of these were troll accounts. That asian woman I saw? Her handle was ilovegays69 with the sarcastic bio line, "Trump is the way to my heart." The troll accounts are limited in their activity, however, as only serious paying customers get to really use the site beyond viewing profiles, which is actually a clever design choice, given the inevitability of pranksters flooding the site.

And although I have yet to find true love on Trump.Dating, I am faithful that many others are finding their perfect fits for affection strengthened by political solidarity and mutual respect for the powers that be. God bless the kink that spawns between their pasty torsos. 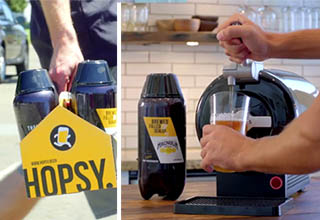 NEXT ARTICLE Hopsy is Disrupting the Craft Beer Business