Jim Kowalczik and his wife Susan run the Orphaned Wildlife Center in Otisville, New York. They are home to 11 bears of varying species including a 1,500-pound Kodiak bear named Jimbo.

Jimbo passed away from liver cancer this past March at the age of 24-years-old. He was originally from a wildlife park in California, but when the park closed Jim and his wife took him under their care because he wouldn't be able to survive on his own in the wild.

It was an extremely tough loss for the Kowalcziks, but the wildlife center continues on with their mission to save and rehabilitate orphaned and injured wildlife including these two Syrian Brown Bears.

Learn more about the Orphaned Wildlife Center or visit their Facebook page. 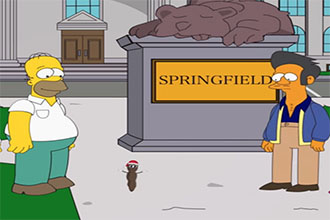 NEXT ARTICLE South Park Just Called Out The Simpsons