To put things in perspective, when I started writing this article yesterday I had just 3 recent racist Tik Toks to use as examples to show this problem of racism on Tik Tok. I hate Tik Tok to begin with so this article was tough for me to write because I had to download the app for research purposes. After another search this morning I now have 10 examples from this weekend alone, showing how this problem has gotten worse in such a short time.

You might think I'm maybe just a very triggerable liberal who doesn't think "edgy" humor is cool but these videos aren't even like remotely funny, the humor is outdated and the stereotypes have been done before many times. It's tiring to see the same dull joke over and over again, let alone if it's racist.

This first example from Georgia has received the most amount of press so far. Two seniors from Carrolton HS filmed the video below and have since been expelled from high school and had their college offers rescinded. *WARNING STRONG LANGUAGE*

#BLACKTWITTER
**RACIST WHITE GIRL POST DISGUSTING VIDEO ON TIKTOK WITH BOYFRIEND BEING RACIST TOWARDS BLACK PEOPLE**
She is a senior that attends Carrollton High School in Carrollton Georgia. This video came out not too long ago and she deleted it.
pic.twitter.com/sonhCakmmP

This isn't the only form of racist video that's showing up, there's become a trend of "How's My Form" Tik Toks that are revealing people's true colors.

Y’all do the same with this girl. Let’s find her school pic.twitter.com/y9UnQmV66g

Y’all talking about Stephanie Freeman and Jeffery Hume but have y’all seen Kaleb Cram? @/kalebcram on tiktok. These racist kids have to be stopped pic.twitter.com/nmFCI2LT9j

WHY IS THIS THE THIRD TIKTOK IM SEEING OF RACIST ASS PEOPLE SHOWING THEIR COLORS?!? QUARANTINE HAS GIVEN U PEOPLE FALSE CONFIDENCE pic.twitter.com/4d3oQv1fU0

WHAT TF IS THIS ! Is it a trend now to be racist or offensive towards black people ??! smh #trendingtopic #racist #TikTok pic.twitter.com/2mSjY3rsZs

This is Lacey May Jones of the UK.

I say we should make her life so she is picking her own cotton and making her own t-shirts.

What is up with being racist on tiktok now!?! The racist are getting brave and they need to be held accountable pic.twitter.com/XwaszNzqSa

These videos seem to be mainly targeting the black community but there are plenty of examples of other racial and religious groups used as the butt of the 'joke'.

289K likes for a racist tiktok which further promotes the “arabs are terrorists” stereotype, this cannot be real pic.twitter.com/dmW63gIBjb

anyway since we’re cancelling #tiktok racists can y’all add this whitie to the list. pic.twitter.com/LgVoawGxBI

Most of these videos are filmed by older teenagers, people who should know better by now, at least you'd think. It's just amazing to me that these people are stuck at home quarantining and they've gotten so bored that they're turning to racist jokes to entertain themselves. 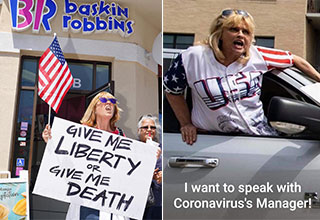 NEXT ARTICLE Karen's of America Are Tired of the Lockdown