A self-proclaimed time traveler from the year 2906 has been going viral on TikTok, claiming that -- among numerous other things -- in 2023 a 'new world' will be discovered beneath the earth's surface.

According to the time traveler, this new world will be called 'Azawa' and populated with its own separate and hostile human civilization. The people of Azawa have supposedly been wreaking havoc in our own society for years -- and are even responsible for 9/11.

But, according to the time traveler, the Azawa aren't the only surprise laying in wait for humanity; since initially going viral, the time traveler has made dozens of other predictions about soon-to-come events, ranging from celebrities faking their deaths to giant waves laying waste to Californian coastlines and even the emergence of people with 'supernatural abilities.'  And in November, we find a dragon in Mexico.

All of which are said to culminate in the start of a World War III in the 2200s that will rage for 700 years. This WW3 is, supposedly, what the Time traveler -- after traveling to 'many different years' -- chose to come and tell us, now, on TikTok.

This savior from the far-flung future, busy spreading his message on the most appropriate channel for informing the public of impending cataclysms and reality-altering events, also happens to promises a 'face reveal at 1m!'

So make sure to get this heroic mystery-man his followers -- it all goes towards preventing the outbreak of supernatural war. And remember to thank the certifiably authentic, time-traveling tiktoker who gave you the heads up. 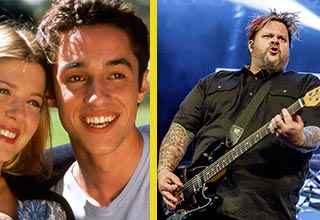