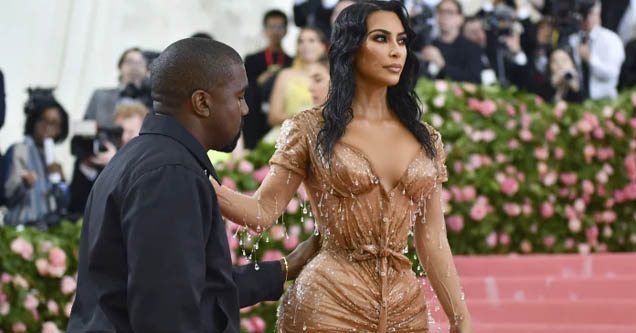 Well, 2021 is certainly starting off big with some major headlines, including the apparently imminent divorce by one of Hollywood's most recognizable couples: Kim Kardashian and Kanye West.

I know, it's crazy. If anyone had what it takes to go the distance, surely it was these two narcissists who are motivated almost exclusively by the drive to create a spectacle. That's the key to a happy marriage, right?

This is the real reason Kim and Kanye are getting a divorce: pic.twitter.com/EG7xu7WppT

Wow, Kanye and Kim are set to divorce ?

After naming their kids like all directions finally things have gone south.

Kanye and Kim getting a divorce, 2021 came early with hotlines.

According to some online reporters, this breakup has been brewing for quite some time and Kanye has spent the last few months almost exclusively in his Wyoming estate, only making the briefest appearance for Kim's lavish birthday celebrations last year.

i used to think that commissioning a hologram of your wife's dead father who you never met and having him call you a genius from beyond the grave was proof of a perfect marriage but i guess i'll have to rethink https://t.co/UyOoVfIGMa

It's also been reported that some of the contentions between the couple stem from Kim's desire to be taken more seriously, as she's been getting heavily involved in the prison reform movement. She's also revealed that she wants to walk in her late father's footsteps and become a lawyer.

Kanye's many public missteps and embarrassing rants in recent years, combined with his hilariously bad Presidential campaign, were definitely not the image Kim was going for and forced her to make a public statement about his mental health.

Mfs surprised about Kim and kanye divorce when she ain’t even vote for him pic.twitter.com/ClmmH99JVF

This reminds me of when Kanye said he’s been trying to divorce Kim for years after thinking she was letting Meek smash pic.twitter.com/whRVhXxm9q

The one positive that many people are noting about the whole situation is that some of Kanye's best work definitely came in the pre-Kim era, so we may get some great music out of this at least.

Niggas when kanye divorces kim and realize he finna drop another classic. pic.twitter.com/BzLqteDd0X

It should be noted, however, that this news still hasn't been confirmed by either party yet, and is still mostly just online speculation. Some people are theorizing that this is yet another ploy for one of pop culture's most opportunistic families to drum up some free headlines.

kris jenner on the phone with hulu working out a deal to start filming a new reality show centered around kim and kanye’s divorce pic.twitter.com/qw1CTfXQoe

i was sad about Kim and Kanye until i realized that they do the whole divorce and breakup thing every year. pic.twitter.com/HaZVTsoVgf

To add even more fuel to the gossip fire, a LOT of people are also spreading the (still-unsubstantiated) rumor that another contributing factor for the divorce was that Kanye got caught hooking up with YouTuber/makeup artist Jeffree Star.

Kanye West and Jeffree Star are what?? pic.twitter.com/RED4obAAZB

why am i waking up to the timeline saying jeffree star and kanye are hooking up.... it is 8:17 IN THE MORNING pic.twitter.com/7Bu3EfaJ2j

The only way ima believe this shit is if I see the tape and Kanye was holding two forms of identification, while fucking Jeffree Star and Jeffree Star is VERBALLY saying he is Jeffree Star, with a camera crew there AND Kanye grandma is in the room pic.twitter.com/7UezozUOwO

This is who leaked the Kanye Jeffree Star news pic.twitter.com/8ZvV1ACsn3

If the news of the divorce IS actually true, we're pretty sure we know the state of Kim's DMs right now:

NBA players trying to pass around Kim Kardashian after the divorce pic.twitter.com/56vNsMqO9T

I guess that leaves us with just one burning question:

If Kim Kardashian and Kanye West are getting a divorce, I wonder who is going to get custody of narcissism. 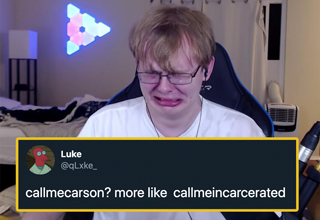 NEXT ARTICLE CallMeCarson Exposes Himself for Sexually Grooming Minors