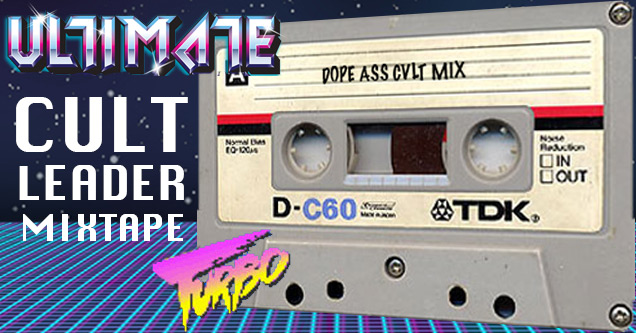 For some reason or another, there seems to be a correlation between being a cult leader and also being a total rock star. Maybe the foundations of the two are similar: egotism, delusions of grandeur, a small penis, etc. could all be considerable factors to why one starts a band or a murderous cult in which one is worshipped as a deity. And there's no reason why an industrious yet deranged narcissist should have to choose between cutting a folk record or building a heavily armed commune.

So without further ado, I bring to you my ultimate, kick-ass mixtape, filled with the hottest tracks from your favorite cult leaders.

Famous Waco, TX minister, pedophile, polygamist, and final manifestation of Christ David Koresch could actually fucking shred. If Koresch's manipulative charisma couldn't win you over to join his higher understanding of the cosmos, then maybe his second love, the six-string, could. Behind the famous alter of the Branch Davidians remained a fully equipped stage backline where Koresch delivered transcendental classic rock long before Creed had even considered to take anyone higher.

Already a rumored pedophile and sex addict, 90's R&B star R. Kelly allegedly has a sex cult within his properties in Chicago and Atlanta in which the lives of multiple women are directed by his every whim. The story broke last July, though there is no evidence that the women are there against their will. However, an former cult member alleged that Kelly controls what the women wear, eat, when they sleep, and what types of sexual encounters they should engage in. Either way, damn good song right here.

After Jim Jones's 918 cult members, including 304 minors, drank poison and entered the great beyond, the FBI recovered some fresh tracks that were recorded before the massacre. "Welcome" is haunting, like a children's sing-a-long from hell. I figured it livened up the mix. Enjoy.

Ol' man Yod innovated health food stores and managed not to murder anyone, although everyone in the cult had to fuck him and all that regular trope shit. But this track kicks, like an even more lo-fi Ty Segal or Thee Oh Sees.

Charlie is the most iconic of cult leaders in history and subsequently on this mixtape. It ain't no secret that Manson was also a rocker and that this is an incredible song. Turn it up, my dudes.

Sci-fi novelist and Scientology founder L. Ron Hubbard made a lot of out-there experimental music, including that weird synth song used in Battlefield Earth. This one sounds like Richard Nixon as a wedding singer in your nightmares and is really taking this mixtape to the next level. You should pop this shit on for your next house party rager, or even a low-volume jam for that Tinder date.

Got a track to add? Want to promote your own cult? Comment below!