Vince McMahon's dreams of another professional football league have been destroyed yet again. The XFL's second try at a league was dealt some heart-breaking news Friday morning when XFL CEO Jeffrey Pollack held a 10-minute conference call to inform employees they have been laid off.

The XFL has suspended all operations and currently has no plans to return in 2021, sources tell @SeifertESPN and @FieldYates. https://t.co/64GOcCL9J8

The league will keep a small staff together to deal with the business side of things, but there are no plans to return in 2021. Fans and employees were devasted and took to Twitter to share their sorrow.

The XFL just laid me off.

I really think I did some of the best work in social media this year, so this really hurts. If you need someone for social, written content, meme goofin’ or anything at all, I’m your guy.

Vince McMahon: Damn I thought the XFL was going to be a long lasting and successful company

Trump spent years attacking the NFL so his buddy Vince McMahon would be in a better position to launch the competing XFL. Now Trump’s disastrous handling of the pandemic has put the XFL out of business. Even when Trump tries to help his corrupt buddies, he still screws them.

AAF this morning realizing their league lasted longer than the XFL pic.twitter.com/HJgOXoRTO8

"Now that the XFL has suspended operation, there will not be any XFL games." pic.twitter.com/441AYuGFHY

While not as entertaining as the NFL, the XFL was not a complete failure as one might imagine. Fans from the eight teams towards the later weeks in the season began rallying around their home teams and even combined to form a large "beer-snake" that the league enjoyed.

It's sad to see an actually potentially successful secondary football league be destroyed ultimately by the pandemic. We're left wondering, what could have been. 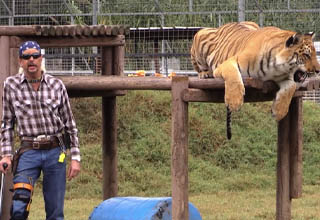 NEXT ARTICLE New Episode of 'Tiger King' Coming This Weekend