Legend has it that driving across the bridge at night will cause a drowned couple to appear in your car.

Alaska – The Kushtaka of the Alaskan Triangle

The Alaskan Triangle is known for stories of evil spirits called Kushtaka luring woman and children to water being the cause of many unsolved disappearances in the area.

In the 1800’s, a woman dressed up in her wedding dress, murdered her children, and then threw them in the river. Some claim that you can sometimes see her ghost in the Slaughterhouse Canyon.

The Arkansas version of the Sasquatch, a 8-foot hairy man was rumored to have been seen around the creeks of Arkansas since 1834.

In 1948, a man, after being horribly burnt, became unstable, eventually torturing and killing his father. When the police arrived they thought, due to his horrible burns, the son was presumed dead and the managed to sneak away. Some claim to have seen him living in the nearby woods.

The road is haunted by a ghost jogger who, after being killed by a hit and run driver, can be seen by motorists and then vanishes without a trace.

The Wicked Witch of Monroe, died at age of 77, and her coffin was to be carried to the cemetery. The Monroe townsfolk decided to cart her body there instead. The coffin repeatedly fell off the cart as if in protest and when she was finally buried, the locals returned to her home to find it engulfed in flames.

Samuel Chew was the chief justice of the Delaware Supreme Court in 1741. After his death, his ghost was reportedly spotted hanging around the courthouse.

Cars parked on Spook Hill often mysteriously disappear or move. Some believe it is because the hill is on an ancient Indian burial ground.

At the bottom of Lake Lanier is an entire town, replete with a racetrack and cemetery. This is due to the government artificial creating the lake in the 1950’s and not particularly caring to clear away the abandoned living settlement the newly-created lake would submerge. There has been an unusually large number of deaths in the lake (17 in 2011 alone). Many people reported that they have felt arms attempting to grab them as they swim in the lake.

Night Marchers are the spirits of deceased warriors who patrol the island to protect scared areas.

The Massacre Rocks State Park is home to the spirits of Native American babies who were drowned by their mothers to prevent them from starving due to famine. If you sit quietly by the river you can hear the babies crying.

Originating in the Chicago suburbs in the 90’s, rumor abound of a man dressed as a clown driving around in a white van trying to kidnap and murder kids.

If you are in the cemetery at midnight, you have to count the steps to 100 and a spectral undertaker will appear and show a vision of your death.

A pregnant woman will lose their child if they pass by it or merely touching it will cause death within 6 months – unless you are a virgin.

After a terrible smell started coming from the well, the city boarded it up. Some people who have sat on the well have allegedly disappeared.

The Goat Man of Pope Lick hides under a railway bridge in Louisville and attempt to lure people onto the tracks so they will be hit by trains.

The creatures that live around it, are inbred humanoid monsters who have mutated after years living alone in the Louisiana bayous.

The Colonel once sentenced a woman to be burnt for witchcraft and, as she burnt, her leg rolled out the fire. There is now a leg-shaped stain on the tomb to signify the deep injustice he perpetrated that day.

A 30-foot long snakelike creature has been sighted repeatedly since the 1930’s.

An explosion caused 13 workers to be trapped in the tunnel, the rest of the workforce gave up on them, assuming them to be dead. Later on, it was discovered that they had actually survived for a long period of time, even improvising a raft to combat the flooding. The 13 men are said to haunt the tunnel to this day.

CA little girl was supposedly murdered on the road and ever since has haunted the route, trying to find the person who killed her.

The year is 1898, and a Swedish- American farmer discovers a massive slab of rock on his farm that appears to have Norse runes carved upon it. No one knows where the stone came from.

In the 1920’s, two men were confronted by a headless skeleton. They quickly hurried back to their boat – and the skeleton followed!

Momo smells terrible, likes to eat people’s pets, and has a pumpkin-shaped head.

Two members of the Crow Tribe arrived at their vollage to finds the inhabitants dead from smallpox. They blindfolded their horses and rode off the cliff so they could join their people on the other side.

Known as one of the most haunted places in the state, Centennial Hall used to be a high school in the 1940’s. A female student playing the clarinet died from a heart attack. She now roams the halls of the building, playing her clarinet.

World famous, Area 51 is the birthplace of countless conspiracy theories and tales of paranormal activity.

Goody Cole (1590-1680) was acquitted of all charges during her lifetime. The locals dug her up after her death and staked her through the heart.

Even after her death, anything bad that happened was blamed on her.

A woman called Mother Leeds who was pregnant with her 13th child, declared “”Let this one be the devil.” and she soon gave birth to a winged, hoofed and horned creature.

A black ball and/or a creepy old woman can be encountered on a dark road that are rumored to slowly drive whoever sees them to insanity.

Multiple dogs were found dead and drained of blood outside the town of Bladenboro during the 1950’s, leading the townsfolk to actively hunt what they believed was a vampiric beast lurking in the woods.

A young woman got pregnant before marriage and her parents forced her to marry the father. The baby died soon after, leading the woman to hang herself out of grief while wearing her wedding dress. Locals claim you can see her ghost hanging from the bridge that crosses the road.

During the 70’s, the citizens of Defiance claimed they were being stalked by a giant werewolf.

In the 1500’s, Spanish explorers vanished in the area while searching for gold. More recently, UFO’s have been spotted above the park.

The ghost of a logger who died in a sawmill accident attempts to get into people’s cars by knocking on their windows.

Pennsylvania – The bus journey to nowhere

A bus in Philadelphia picks up people who at their lowest point. Once they are ready to rejoin the world, the bus allows them off.

There is a rock somewhere on Devil’s Foot Road that has a human footprint and hoof imprinted in it.

Julia got sick at a young age and died, her body placed in the family mausoleum. When another member of the family died, they opened the mausoleum to find Julia no longer in her coffin. The thinking goes that Julia wasn’t dead but in a coma, and had woken up and tried unsuccessfully to escape her tomb. After the other family member was laid to rest, the Legare family couldn’t seem to get the mausoleum’s door to close. Even after replacing the door multiple times, it was always found open just days later.

Walking Sam is a tall, slim figure who appears at night and convinces Native American teens to commit suicide.

An old abandoned high school, Pine Haven’s bathroom mirrors are said to contain the spectre of a boy killed by bullies who smashed his face into the mirror.

In an early 1900’s Texas town, children started to go missing. The rumor was that a woman was putting candy outside children’s windows with notes attached, telling them where they could get more. A local farmer found a collection of rotten teeth on his farm, and then the body of a boy with candy in his pockets.

It is illegal to take anything from the Escalante Petrified Forest, and if you do decide to take some of its wood home with you it is said you will be cursed with sickness.

An 18th century diary tells the story of a poor family in Montpelier who couldn’t afford to look after their elderly relative so instead froze them in the forest.

A bus moving patients out of the Clifton Insane Asylum crashed and all the mentally unhinged passengers escaped. The authorities were able to track down every patient but one – the Bunnyman. He would use a hatchet to attack solitary travelers.

Bigfoot is a global phenomenon but has had the most recorded sightings in Washington state.

Mothman was first sighted in 1966 and resembled a giant flying creature with red eyes.

A group of Boy Scouts died in the area. Now they can be seen hanging from the surrounding trees, watching visitors from afar.

A group of Cheyenne girls were attacked by a bear, with only two managing to escape. The two remaining girls ran into two boys and, for some reason, the boys convinced the two girls to act as bait. The boys sat on top of the Devil’s Tower, firing arrows at the bear. The bear attempted to climb the tower but fell, scratching all the way down. Hence the unique shape. 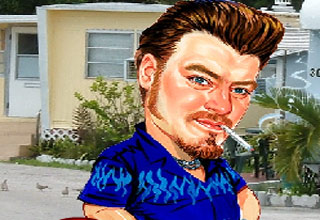