I've recently noticed a trend, especially among teenagers. Some kind of an urge to draw someone's attention in any way possible. Some of the effects are plain pathetic and most are permanent, and it's weird to watch somebody turn into a freak because they need to be in the spotlight. Here are some of the finest example.

These are extremely silly, since tattoos are more or less permanent. Tramp stamps are a fine example, but attention whore go much further, especially when they have a friend that starts their way of becoming a tattoo artist. I've seen this girl on Blog TV that works in a tattoo parlor in Guam that's basically a training canvas - she's covered in tattoos that neither match nor are they placed logically or look nice. Looks like she let her friends tattoo on her because it's free and shit.

Another quick way attention whores use to draw attention is to put metal shit in their faces. If you want to look like a grenade blew up in front of your face or you escaped from some pasture with a nose ring resembling a cows, this might be the way to go. Even though it's not permanent, it's still stupid. Joker did that in Batman, because his parents didn't care about him. 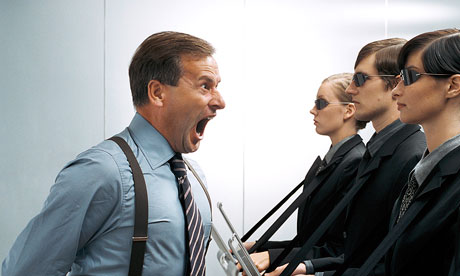 One of the dumbest recent trends is to let a dingo or a coon bite you so you catch rabies. It's what the people who act like wusses do to become more violent and angry.

This must be one of the most retarded fads of this year. Girls shaving 1/3 of their heads to look like the shit musician Skrillex who basically mixes random mechanical noises and calls them songs. Apparently that shit is what's hip and even though it's not even near the actual dubstep, his music seems to be considered the epitome of what dubstep is. Look at that stupid hair! It's like some idiot passed out on somebody's lawn after a party and got ran over by a lawn mower

NEXT BLOG Not a teacher anymore