You may have thought “Jersey Devil” was just the name for people from New Jersey, like “Michigander” or “Texan.” But it is in fact an actual name for what was thought to be a fictional creature. At least until this Tuesday, when a man from Little Egg Harbor, New Jersey caught some pics and a quick video of the mythical being.

"I was just driving past the golf course in Galloway on Route 9 and had to shake my head a few times when I thought I saw a llama," said Dave Black in an email to NJ.com. "If that wasn't enough, then it spread out leathery wings and flew off over the golf course," continued Mr. Black, who apparently has no idea what a llama is.

According to Animal Planet (which is about real animals) the legend of the Jersey Devil dates back to 1735. "Mother" Leeds had 12 children, which is a great way to get the nickname “Mother,” but her husband was a drunk and did not help raise them. When she found out she was pregnant with a lucky 13th, she screamed "Let this one be the Devil!" Born on a stormy night, the baby, who at first appeared normal, transformed into a creature with hooved feet, clawed hands, glowing red eyes, bat-like wings and a forked tail - basically, Donald Trump, but with better hair. The child-creature killed its mother and father, several midwives, and many of its siblings (so like, 7?). It then pulled a reverse Santa Claus and flew up the chimney, escaping to the Pine Barrens of southern New Jersey.

Mr. Black, who is not in fact Pinocchio, claims that the picture is real and not photoshopped. Black said one of his friends thought it might have been an owl carrying and flying away with its prey, but that the animal he saw was about the size of a deer - and in case you forgot, he doesn’t know what a llama looks like. Since the recent “spotting,” residents have kept their doors and windows tightly locked, though to be fair, that may also just be because they still live in New Jersey. 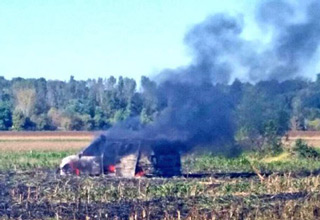