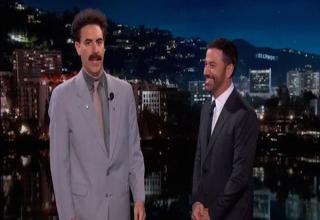 RELATED MEDIA
In December 2015, late night host Jimmy Kimmel was talking about Hanukkah when a very special guest walked out on stage—Borat (as played by Sacha Baron Cohen). "Borat" explained that the reason he was on the show was to warn the world about the “frivolous nincompoop” Sacha Baron Cohen, who is famous for portraying characters like Ali G, Bruno, and, most recently, Donald Trump. “The only person who would ban Muslims is someone with a brain like a female chicken,” he said. “It is clearly a parody of a rich American racist. Cohen have spent all the money on orange paint for face and he leave no money for wig. Now I know what happen to Pamela Anderson's pubis. It is on his head!” In the end, it turned out the real reason Borat was on the show was to premiere the new trailer of “propaganda footage” for Cohen's upcoming film The Brothers Grimsby, in which he plays the hapless brother of a James Bond-type British spy alongside Mark Strong and Rebel Wilson.
10/10
1/10
Tags: unbelievable reactions donald trump might gold 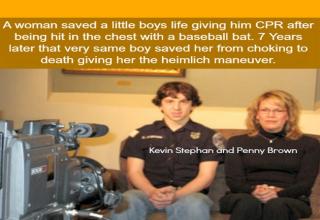