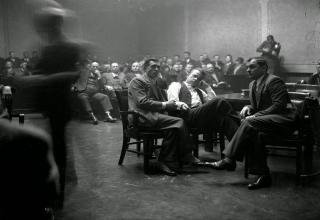 RELATED MEDIA
John Dillinger, center, handcuffed to Deputy Sheriff R.M. Pierce during Dillinger’s murder trial hearing in Crown Point, Indiana. Though his trial was scheduled for March 12, 1934, Dillinger would escape from the Crown Point prison on March 3. The best-known American bank robber of the 20th century was John Dillinger. Although his career lasted only a little more than a year from June 1933 to July 1934 he gained nationwide notoriety as the country’s most wanted criminal. Dillinger was born in Indianapolis, Ind., on June 28, 1902. He grew up there and in nearby Mooresville. In 1923 he joined the United States Navy but deserted the service within a few months. He reappeared in Mooresville on Sept. 6, 1924, and was caught robbing a store. He served time in Indiana prisons until 1933, becoming a hardened criminal. Paroled in May 1933, Dillinger formed a gang and set out to rob banks. Captured four months later, he was rescued by gang members. After robberies in several states, he was arrested in Arizona and returned to Indiana and jailed. He executed a remarkable escape on Mar. 3, 1934, and continued his bank robberies. The object of a massive manhunt by the Federal Bureau of Investigation (FBI), he was so legend says lured to the Biograph Theater in Chicago on July 22, 1934, by Anna Sage, the mysterious so-called Lady in Red. There FBI agents gunned him down.
20/20
1/20
Categories: Wow
Tags: fascinating photos collected from history NEXT GALLERY 32 Outstanding Pics For A Great Day