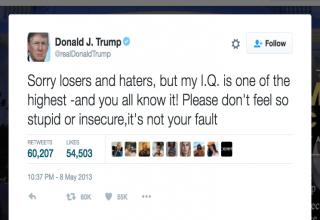 RELATED MEDIA
Let’s get one thing straight: as a PERSON, Donald Trump is dumb, racist, and misogynistic. Despite these qualities (or maybe BECAUSE of them), Trump ended up being the ultimate Twitter user.

Just look at the tweet above. It combines name-calling, IQ bragging, and passive aggression into two short sentences. Everything this guy posted was like an entire thread of back-and-forth arguing rolled into a single message. And no matter how you feel about Trump, this is a genuinely funny statement that he released into the world.
5/5
1/5
Categories: Funny Funny Pictures Funny cringe Wtf Facepalm Cringe
Tags: donald trump twitter ban banned tweet haters and losers american president united states funny lulz 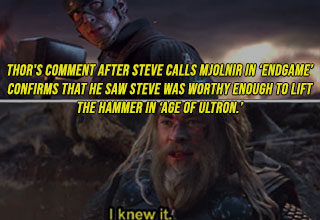