So yeah, that's a THING.
And if this whole "check her internal temp with my special meat thermometer" schtick wasn't already weird, they'e also recruited friends to help out by jumping on the bed or kicking it from underneath to create some friction that, again, in the eyes of God, is SUPPOSEDLY not sinful because the people soaking didn't generate it.


I love when people first learn about crap like this pic.twitter.com/TBietB9LQg

Did you know if someone else jumps on the bed, the movement doesn’t count? ##notallheros ##exmormon ##soaking ##soaktok ##hiatus ##backatit ##mormonshit##exmo


Since Mormons are tending and some people don't know what soaking is pic.twitter.com/gFGsyOs3Hy


That is creepy as f--k, but not gonna lie it's also some Level 100 Wingman s--t to help your friend out like that. However, it can apparently also be a source of contention:


Ok so that answers a few things. I love that it's also called "marinating."
"Hey Steve, where'd you go at that BYU party last Friday?"
"Hehe, I found a cutie and gave her the ol' Mormon Marinade."
"Heck yeah, good shirt bro. Forkin' get it." (idfk, pretty sure Mormons swear like they do in The Good Place)
It should be noted that in the eyes of the actual church and pretty much everyone else, this practice is still VERY MUCH considered sex. But like I said, horny kids are gonna horn it up one way or another.
Just gonna leave this gem here: 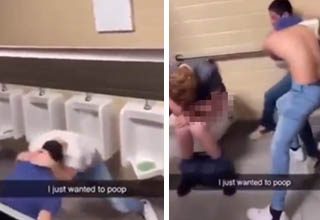 NEXT VIDEO Bathroom Brawl Bursts in on Unfortunate Pooper