This is obscenely creepy, like a real life horror movie.

Guy has an unsettling encounter with a "Karen" neighbor about what he can and can't mow on his own property.

During the Dodgers-Giants game on August 9th, we noticed one of the fake fans in the stands was clearly a real guy. The announcers were oblivious as he did his best to try and blend in with the cardboard cutouts around him, however he couldn't hide from the cameramen!

Hey Wendy, you better go check your pants, because that sounded wetter than a whistle. Fart Stamp (9:26)

It's always fun to see celebrities before they hit the big time. Here's a whole bunch of Game of Thrones actors before they got famous.

Wes Scantlin was having such a hard time covering Nirvana's "About A Girl" he probably should have stopped.

#7 - The Exposing Catfishes Trend On TikTok is Pretty Ruthless

The kids are going to be just fine. It's the adults we're worried about.

Gotta admit. That was entertaining. I would like to see more of this video.

Oh the struggles of working from home, when you have to poop but you also have to stay on your work call. Make sure you turn off those cameras before you pull down those pants ya'll.

If you're using Zoom while stuck in quarantine, try using our Funny Zoom Backgrounds For Your Next Call.

#10 - Restaurant Manager Puts Karen in Her Place After She Demands, "More Food"

It's nice seeing a wild Karen in her natural habitat, complaining to some poor service industry worker that she needs more of whatever they didn't giver her enough of. This time though, Karen meets her arch nemesis, the manager and gets told the hard truth. Of all the things this woman could use, more food is not one of them. Respect to this guy for laying it down.

#11 - This Guy's Moonwalk May Be Smoother Than Michael Jackson's

I don't make comparisons to the King of Pop lightly, but this guy might genuinely have perfected the moonwalk that MJ made famous.

#12 - Dude Breaks up With His Girl, Then Dodges Her Like a Champ

There isn't a single moment in this entire video where the police officer says anything that could be considered a definitive statement. Sorry sir, but I've pulled you over today because you driving entirely too safe for my comfort, also I saw that you were Black and wanted to 'check ya out".

We don't need to tell ya'll about racism, but while you're here check out this: Racism Is Over Thank You Celebrities

This looks like is could be straight out of a movie.

Researchers exploring the deep ocean off the South Carolina coast capture a group of sharks feasting on a swordfish when one of them unexpectedly becomes dinner himself.

When it makes that wet, flapping sound, you should probably go check your drawers.

From the creator:
Last week, I scooped a jar of muddy water and weed out of a local pond, sealed it and placed it on my north facing window sill, in an experiment to create a sealed ecosphere. Let's have a look at some of the things I saw in there during the first week...

Ahh damn it. Looks like he'll have to build a bigger fence. for more fence related humor check out this FBI agent who could learn a thing or two about using his brain.

Necessity is the mother of all darwin awards.

"Unwelcomed" visitors to a private marina drives a future Karen absolutely batty. This lady needs to take a chill pill because if something like this sets her off, she's going to have a long life ahead of her. Want more? Check out more Karens being Karens.

According to the criminal complaint, Wharton beat his spouse so badly, she had several gashes on her head and face. Police say her injuries were so severe, she had to be taken to the hospital where she was diagnosed with a brain bleed. Some of the domestic incident was captured on the couples "RING" doorbell system.

If you're reading this you've made it to the end of the list! Congratulations on having an attention span that is greater than 4 minutes! We hope you enjoyed this list of the most viewed videos and hopefully, it brought back some (pleasant) memories of the past year. Let us know in the comments if you think we missed any videos, or if you disagree with any of the items in this list.

If you have a few extra minutes, take the brief survey at the bottom of the page to give us some feedback and help our editors to continue to brin you the best content in 2021. In closing, let's raise our glasses and make a toast to 2021. Hopefully, the new year will be **NOTHING** like the catastrophe 2020 was. 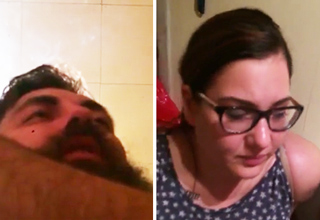