During a six-day undercover sex trafficking sting in Florida, authorities have arrested upwards of 108 people, including child predators and those seeking prostitution. While the CEO remained free from persecution, many Disney employees were among those apprehended and one retired judge.

Police on the scene made a comment, "The arrests of a human trafficker and four child predators alone makes this whole operation worthwhile. Where there is prostitution, there is exploitation, disease, dysfunction, and broken families."

An ongoing problem with Disney.

The sting, which they called "Operation March Sadness 2", started when detectives followed advertisements prostitutes had been posting on various websites and social media to identify the people soliciting them for sex. They also identified many people who were thought to have been soliciting children and initiating inappropriate communication.

Among those arrested, four were identified as Disney employees. Xavier Jackson, a lifeguard for the Polynesian Disney Resort, was sending concerning messages to Polk County Sherriff Grady Judd under the assumption that he was a 14-year-old girl. Wilkason Fidele worked as a waiter at Walk Disney World's Tomorrowland, Shubham Malve, a software developer for Disney, and Ralph Leese who worked in IT for Disney for four years. The latter three were all soliciting prostitutes when arrested.

Daniel Peters, a former judge of the Cook County 4th Sub Circuit Court, was also among those arrested who were soliciting prostitution. Judd commented, "He requested an attorney. Well, judge, you need an attorney. You got problems."

It comes as no surprise a place like Disney would attract child predators and lonely men seeking prostitution. Hopefully, Disney reviews their hiring policy and does some extensive background checks on their new hires, but that's probably asking too much for a company with over 200,000 employees. 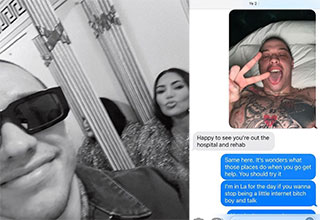