Alec Baldwin loves his children and we wouldn't dare suggest otherwise. However, it seems Mr. Baldwin, a father of seven, longs for the days when he didn't have so many of them. Or at least for the things he "used to do" before he had seven of them.

In a video posted to social media, date unknown, Baldwin laments about all the things he wished he could do, but can't, because he spends all his time with his family. Things like having weekly poker games, or playing double tennis. Going to Yankee games or the opera, the things he used to do.

There is nobody on earth that loves their kids and doesn’t regret having 7 of them more than Alec Baldwin pic.twitter.com/Z2hevuGaUW

Baldwin who is a talented actor gives us a weak performance and does little to convince us that he does in fact, "love spending time with his kids." If having children really "changes your life", as so many people love to proclaim, then we can only assume that Mr. Baldwin's life has been changed seven times over. But don't worry, because he's "cool." He's cool.

Here he is talking about having child number three. Can you feel it? The excitement?

It's been implied that Alec Baldwin regrets having 7 kids but look how excited he was about number 3 pic.twitter.com/Uy6c4V4xwM

We aren't saying that Mr. Baldwin regrets having seven children. We would never imply that. We wouldn't. All we're saying is why doesn't a guy with all that money hire a nanny, or a team of nannies to watch the kiddos so he can catch a game every now and again? 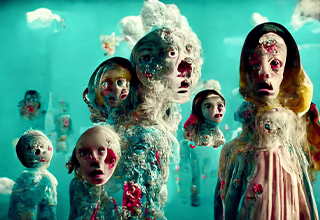 NEXT ARTICLE AI-Generated Horror Cryptid Is Both Intriguing and Terrifying