A baseless conspiracy theory has been circulating on Twitter recently that Bill Gates is responsible for killing off thousands of cows on a cattle farm in Kansas.

According to local news, the death of the cattle was largely due to high humidity, no wind, and a quick rise in temperature over the last few days, with temperatures reaching as high as 110 degrees Fahrenheit. A video was shared on Twitter of the dead cattle, which sparked people to theorize their own reasons for this mass cow death.

Thousands of cows in Kansas are dead due to extreme heat. This is expected to occur more often as the climate crisis worsens.pic.twitter.com/qqKtkrKy55

Scientists say the extreme and erratic temperature fluctuation is due to climate change. However, many people on the internet have their own opinions about the incident.

I really don't believe that heat killed thousands of cattle

There's much bigger heatwaves all over the world

I just don't buy it!

In speculation about this strange event, people began to throw around Bill Gates' name, stating that he has been invested in the development of synthetic meat substitutes to help get the public away from commercial agriculture and to fight the effects of climate change.

Who would benefit from thousands of cows simultaneously dropping dead? Maybe someone invested in synthetic meat?

Many people cited the fact that Bill Gates is the largest individual owner of farmland in the United States, owning an estimated 300,000 acres of land which he rents to farmers for profit.

Bill Gates has said that he believes the emissions and water-heavy way cattle ranching is done in the US is unsustainable for our planet and would prefer for developed countries to switch completely to synthetic beef.

Bill Gates has quietly become the largest farmland owner in America. At the same time, he’s become a leading voice in the push for “synthetic meat.”

Here’s the story of how Bill Gates is waging a war on meat to make millions - and hiding behind “climate change” to do it.

Others pushed back against the growing conspiracy that Gates controls the beef.

Roughly 3000 cattle died from the heat in Kansas yesterday. The Q nutters are claiming that it's something Bill Gates did to force people to be vegan. The cuts to education funding that Reagan started in the 80's are showing results. I say it's time for one hell of a barbeque.

Even if Bill Gates had something to do with this, nobody would ever really know. Gates is so rich he can do whatever he wants and that's going to scare people. The real tragedy here is that it's a sad day for the rancher who has to clean it all up and start again. 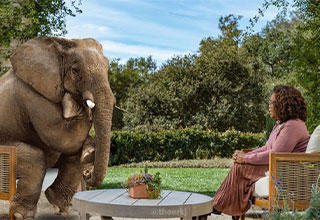 NEXT ARTICLE Elephant Tramples Woman, Returns to Her Funeral to Trample Her Some More