Heard's lawyer asked Baruch in open court whether or not Depp texted him, "I hope her rotting corpse is decomposing in the trunk of a Honda Civic."

Isaac seems startled by the question, asking her to repeat it. "Do you recall... Mr. Depp... ever telling you that he hoped that Amber Heard's rotting corpse is decomposing in the f**king trunk of a Honda Civic?"

The clip above cuts early; it has been widely reported that a wave of laughter subsequently passed through the crowd in attendance.

Baruch is a longtime close friend and neighbor of Depp, even staying rent-free in one of Depp's properties for years. Earlier in the trial, he reportedly became emotional while recounting what he called Heard's "lie" and the damage it allegedly caused both the couple themselves and the people around them.

Depp's case against Heard comes in the wake of a years-long dispute that has painted an infamously WTF relationship and overseen numerous allegations of abuse, including that Heard had left a turd on Depp's side of the bed.

Why Depp chose to specify that the car was a Honda Civic is yet unclear. 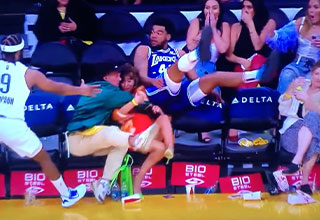