Five years after committing and admitting to sexual misconduct, Louis CK has risen back to the top of the comedy world by winning last night’s grammy award for the best comedy album of 2021. Beating out the likes of Kevin Hart and Chelsea Handler, the announcement came as a surprise to many who were shocked, like we were, that Louis CK is not only still spurting out comedy, but that an album in which he jokes about his own misconduct would find itself finishing above four other nominations at the Grammys.

People were rightfully disturbed that a week after Will Smith's Slap put his Oscar under review, the Grammys would give an award to a comedian guilty of significantly worse.

In what is his ninth comedy album, this special is his first to be released since the scandal, which makes its victory feel even more out of place. It's as if they want us to celebrate his ability to still make a comedy special. Perhaps there should be some new categories for cancelled artists.

This decision among others has put the awards under serious scrutiny, as people question the ultimate purpose and power of cancel culture.

There is no such thing as cancel culture when men abuse women. If Weinstein wasn't in jail, he'd probably already be producing movies again.

But as many people are pointing out, perhaps it should not come as a surprise that Louis CK managed to finish first. After all, he has lots of practice.

I wasn't surprised that Louis C.K. beat Chelsea Handler for the Grammy for best comedy album.

Finishing in front of a woman without her consent is what he does. 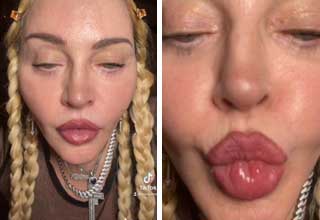 NEXT ARTICLE Madonna Shares 'Bizarre' TikTok That Has Fans Concerned