A man was caught on video having a breakdown in an Istanbul airport after believing the airline has lost his four dogs. After begging employees for help, the man eventually falls to the ground. "This is my life! My Children," he cried. This is one instance of an airport freakout we can actually get behind.

The video has gone viral, with this excerpt gaining over 6 million views on TikTok. The full clip was also posted to YouTube.

While watching the video makes it seem like the airline has lost his dogs - like many of them have been doing with bags recently - a different video claims this situation was a little different. Apparently, this man was flying to Switzerland with a layover in Istanbul, and during that stop, he asked employees if he could check on his dogs and was denied, leading to his reaction.

While it's understandable he wanted to check on his dogs during the layover, it makes sense that airlines don't let people see their luggage once it's been checked.

Flying with dogs is tricky, but as some people pointed out, checking them as luggage is not always the best idea. "They store pets in the baggage area where it's freezing," one person says. "This is why I'm so skeptical to fly with my dogs in cargo," said another.

According to this video, he was thankfully allowed to see his dogs, and they all made it to their destination safely and united. 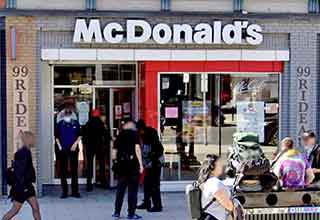 NEXT ARTICLE The World's Most Dangerous McDonald's Finally Shuts Down