Exploiting your kids for followers and brand partnerships is never a good look, but getting rid of those kids when you no longer want to deal with them is much worse.

A mommy vlogger, Myka Stauffer, recently gave up the five year-old orphan she had adopted from China in 2017.

Myka and her husband Jim adopted the kid, Huxley, knowing he had autism, but after three years of caring for him, they decided they couldn't do it anymore and rehomed him somewhere else.

Of course, they sent the kid away only after putting him in videos that got millions of views and helped them get tens of thousands of followers and lucrative deals.

Many of their followers also donated money to help fund their trip to China and cover adoption costs for the kid in the first place.

Essentially, the couple monetized a special needs kid and gave him up when they decided he was too much work.

myka stauffer really just gave her kid away bc adoption wasn’t a dreamy aesthetic journey like she thought it’d be these ig moms are another level of gross. that poor sweet little boy.

So myka stauffer really gave up her kid she adopted from China a few years back full well knowing he had mental/physical health issues just because things got hard? HOW DISGUSTING IS THAT? I mean like this poor boy...

im sick @MykaStauffer adopted an autistic child from china and after years of having him, she gave him up for adoption because he had “bad behavior” after using him for $$$ on her youtube channel of almost 1mil subs. people like this do not deserve followings or children

My heart aches for poor Huxley. They dragged this poor little boy all the way from China, making him start all over again, then giving up on him80% of her followers she gained from the adoption story, got sponsorships and her subs even funded the trip to China #mykastauffer

People have been tearing into the couple online and calling for any brand that supports them to cut ties immediately.

We all know parenting vloggers are obnoxious, but this makes them look straight up cruel.

hey heres a pic of 2 year old huxley with his hands duct taped by his “parents” myka and jim stauffer @mykastauffer as punishment for sucking his thumb as a coping mechanism...when their older children also sucked their thumbs and were never punished pic.twitter.com/lwEYsBoQJZ

Almost seems like kids were better off when their parents just gave them money to go to the store and pick up cigarettes, rather than monetize their likeness online. 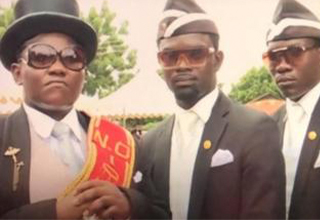