Maison Des Champs, who calls himself the Pro Life Spiderman, is a rock climber and anti-abortion activist from Las Vegas, and yesterday he successfully climbed the 61-floor Salesforce Tower in San Francisco without any gear.

If you haven't already heard about the leaked Supreme Court ruling on Roe v Wade, then please return to the rock you live under, we promise you are better off there. But if you have heard the news, and you refrained from climbing the tallest building on the West Coast, you're decision-making skills are far and above Des Champs climbing skills, which are clearly excellent.

BREAKING: The man climbing the Salesforce Tower has made it to the top and has been arrested. His name is Madison DeChamps and he describes himself as a “Pro-Life Spider-Man.” pic.twitter.com/O6TbKAhqE8

From the 33rd floor of the salesforce tower in SF. Absolutely insane pic.twitter.com/KR9Z1SnD4n

Why would someone who's pro-life risk their own life for something so pointless as climbing a building without ropes in protest of abortion, all the while guaranteeing himself an arrest? We don't know. That's the craziest thing about this whole story. Our only explanation is that Des Champs is a product of the horseshoe effect, where he is so pro-life that he's become anti-life.

Every day I marvel at how absolutely Pro Death the people who claim to be Pro Life really are.

The climb ended around 10:50 am when the San Francisco Police Department arrested Des Champs after he reached the top of the building, but reports state that at 9:21 am, people on the street notified police of a man scaling the building.

The hour-long climb caught the attention of many on Twitter as local helicopters started sharing pictures of a man 30-floors up without any gear. Des Champs himself took a break to post an update on Instagram, promoting his cause and saying he wished he had brought water.

Not much else to say, people are crazy, what's new? 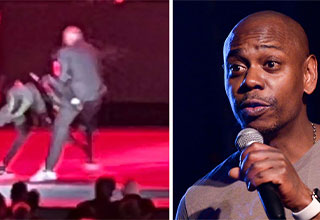