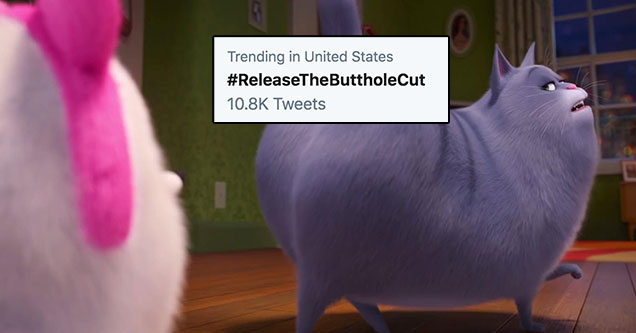 Remember Cats, the movie with freakishly real looking cats that had human like breasts and butts? The one that gave every furry in America a wet dream and scared the brain of all those brave enough to buy tickets for it? Well, do we have some news for you!

Today on Twitter, #ReleaseTheButtholeCut began trending and those of us brave enough to click on it found ourselves in a uncharted territory. Would you believe us if we told you, someone out there got paid to CGI out all the 'cat buttholes' from the flopped horror musical Cats? 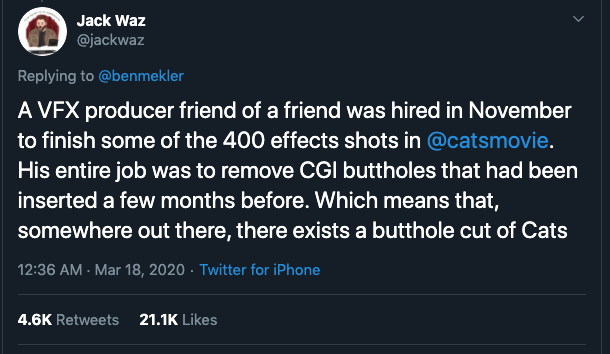 Well, according to Jack Waz on Twitter, a friend of his was paid to do just that. Delete and edit out buttholes from the Cats film. Honestly, I know we said those cute penguins walking around the Aquarium was the feel good story of the day, but we take it back, it's definitely this.

So we would like it known, that we here at eBaum's World stand with the rest of you in demanding that Hollywood #ReleaseTheButtholeCut.

Fear God and #ReleaseTheButtholeCut is where we're at with Twitter today. Can someone just wake me up when 4/20 for a month starts? pic.twitter.com/fjuRwFabO3

I keep pondering what is wrong with the world..

Then every morning people like you have shit trending, and the mystery is solved. pic.twitter.com/YwcZSiWl6g

Reminder that The Secret Life of Pets had the guts to put a butthole on the cat...#ReleaseTheButtholeCut pic.twitter.com/kHCE67zfMa 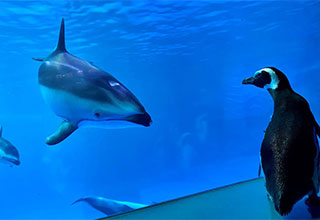