Taylor Swift just dropped her new album "Midnights" which has sold over 3 million copies in under two days, but it has some people reminiscing about the old days when they knew Swift in high school.

Jessica McLane is one person who claims that she went to school with the pop star, saying "I went to the same high school as Taylor Swift, we grew up in the same town. Everything Ms. Swift does is intentional."

McLane posted a few videos on TikTok explaining her relationship with the singer, starting off by apologizing for not knowing much because she was younger than her when Swift became famous.

She began her first video by saying, "In 2006, I’m a freshman in high school. Taylor is I think a junior. ‘Teardrops on my Guitar’ had just come out I think over the summer. Obviously, she got really big, and that’s the year that she left school and got home-schooled."

She went on to say everyone "hated her" mostly because she was about to become famous and everyone was jealous.

"She was literally 16, 17, leaving high school to pursue a career that people were telling her that she could never have," McLane said, "Also, the guys she was writing these songs about, they were still in school. They were still there. And now they have a hit song about them talking about what a shitty boyfriend they are."

She explained that most of her classmates started spreading rumors about Swift saying she bought her fame and it was undeserved.

McLane said, "But the fact remains that there were not a lot of people in high school who had nice things to say about her."

In another video, McLane explained that because her school was so close to Nashville that everyone who knew how to create music was trying to make it in the business and many people who went to her school were playing gigs in clubs and coffee shops and weren't getting noticed at all so it's strange that Swift suddenly got noticed.

Many commenters pointed out that McLane could just be trying to slander Swift, but she came back with yearbook evidence of a collage photo of a bunch of students hanging out and Swift was clearly one of them.

In another video, McLane said "Fearless" had just come out and Swift invited the entire 2009 senior class to the Country Music Awards.

McLane said, "When I found out that we were going, we were all really excited. I mean, who gets invited by Taylor Swift to the CMAs? That’s really cool, but it was very random. Like, we didn’t know why Taylor Swift was inviting us to the CMAs." She even showed off the booklet and schedule of the CMAs as proof that she went.

Jump ahead to 2022, McLane explains that Swift's new album "is gonna be released on Kim Kardashian's birthday. That’s when I start realizing Taylor’s a petty bitch."

She started digging deeper and learning all the subtle things that Swift puts in her songs about break-ups and times she's been wronged by other people. The song "Bad Blood" was about Swift's relationship with Katie Perry and the song "Vigilant Shit" on the recent album is apparently about her old manager Scooter Braun who sold the masters to her songs for $300 million dollars.

McLane came to the conclusion that Swift holds grudges for years, and plans all of this stuff out so she can get back at all the old people who hurt her.

"Y’all, she invited us to the CMAs to say f–k you,” McLane said. “And we deserved it," McLane concluded in her video. 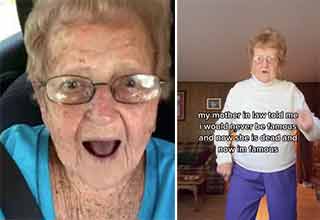