Weird Al came out on stage, accordion in hand and a serious look on his face. He promptly joined in on Cuomo’s guitar solo. He then hopped on the mic for a round of “Hurry boys, she’s waiting there for you” and even joined in on the chorus.

Weezer unveiled the awesome cover of the Toto hit this past spring in response to a Twitter account ( @WeezerAfrica) that had been begging them for months to play it. When Weezer debuted “Africa” live in June on Jimmy Kimmel Live!,Toto keyboardist Steve Porcaro joined them during the instrumental break. Since then, Weezer has made the song a staple of their Summer Tour set lists.

Toto was so amused by the cover, they responded in kind with their own cover of Weezer’s “Hash Pipe.” Guitarist Steve Lukather told an audience in Vancouver (where Toto debuted the cover of Hash Pipe) “We figured since we were smoking hash since before they were born, that’s the one we should do,” Guitarist Steve “This is our tribute to Weezer. God bless ’em.”

Check out Toto's cover of Hash Pipe below: 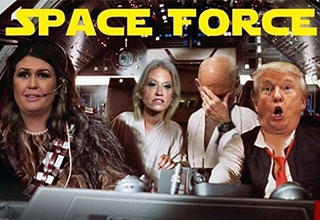 NEXT ARTICLE The Internet Reacts To Space Force