McDonald's Japanese menu has been a source of intrigue for western audiences, but would they really take it that far?

A tweet revealing what at first glance appeared to be a fry-pubed Ronald McDingdong advertising McD's in Japan had users shocked and confused.

Looks like my “Try a McDonalds in every country I visit” rule will not happen when I visit Japan... pic.twitter.com/vB51enAnt6

The food site Delish noticed the stark similarity between the ad previous work by the artist "wizardskull."

Twitter users began to wonder if the ad was fake.

Clearly not real, probably Photoshopped: notice the definitely NOT McDonald’s Mark in the center of the fries container. That’s likely the “signature” of the guy who made it, Yotteba or Abettoy. よってば could be a mildly humorous tag line in Japanese, FYI.

Hard to say. In Japan they have some weird stuff. As You saw when You were there

Twitter user "Jonny Cairo" came through with the real answer: The ad was a parody by a company who emphasizes natural or "naked" ingredients.

This is from Yotteba, a chain of Izakayas (Japanese style tapas bar). This is a pun on the fresh ingredients which are referred to as “naked ingredients” in Japanese and they are stressing that they make their fries from scratch on-site, not pre-processed like at McD’s.

A write-up by Unseen Japan takes it to the house.

Nearly all of Yotteba’s ads are a little offbeat. And the container design — and the ads — are clearly tongue in cheek. Yotteba knows it’s mimicking the Golde Arches with this ploy. And it appears happy to keep the gag running to appeal to its customer base: adults looking for someplace to eat and drink after work.

Gotcha! We hope Wizardskull is raking in some sweet royalties (with cheese). 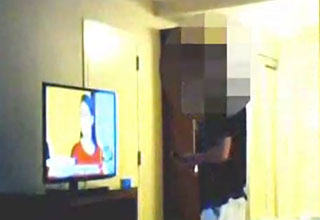