Even drug traffickers are getting into the Halloween spirit. Clodoaldo Antonio Felipe, part of the Comando Vermelho criminal organisation, the largest drug distribution network in Brazil, is currently serving a lengthy 36-year sentence in Coronel Odenir Guimaraes Prison in central Brazil. At the end of his sentence he would be 74 years old - classic grandma age. Perhaps inspired by this thought, Felipe crafted an escape by dressing up as on old lady.

In a plot twist even the writers of “Prison Break”, which ran for 81 episodes, could not come up with, Felipe procured a Hollywood-level mask and costume and attempted to wear it right out of the jail. But just like Mrs. Doubtfire, he was revealed in the end.

Prison guards did not suspect an escape at first, and were only surprised as to how an elderly woman got in the prison, as they probably don’t get a lot of old lady types. When female officers were called for a search, they were quickly surprised to find it was actually a man, and he was not happy to see them.

“The penitentiary guard did not recognise the senior lady and this is why he asked for her ID. He never expected it could be an inmate trying to escape,” police spokesman Andre Veloso said.

Police have launched an investigation to find out how Felipe was able to acquire the clothes and mask, which sells for as much as $900, but will probably be 50% off on November 1. 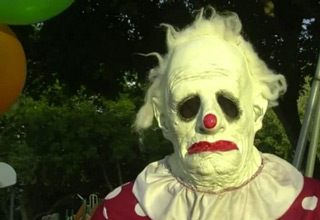 NEXT BLOG Clown Will Scare Your Misbehaving Children For a Fee