So I was a bit drunk last night. Had a crappy day at work so me and one of my fellow co-workers (who shall remain nameless for this little moralistic tale of woe) decided to go to the bar for a couple of 'swift' ones after we had finished up for the day. Four hours later after numerous 'swift' ones and a few 'slow' shots, the co-worker had staggered out the door shouting obscenities at the voluptuos barmaid and I was getting the back of my throat examined by a fine young lady's tongue.

I'd seen her in the bar a few times before and to be honest we had been dancing around each other for some time - the odd comment here, a furtive glance and sly smile there. Who knows what brings two people together; all the planet's alligning, the proverbial pig flying overhead at just the right time, maybe she just liked the cut of my jib? I'm still unsure but I'm guessing that it was probably a combination of me still being in my suit, the copious amounts of booze and my banter - I can be a bit of a charming bastard when the ale's flowing (her exact words, not mine). As the old saying sort of goes, one drink led to another, and before you know it I was leading her back to my place for a (ahem) coffee.

I regretfully explained that I did not in fact have any of the previously proferred beverage and confessed that as an absolute cad I had lured her back under false pretenses with a hidden agenda of ravaging her as soon as we passed through the door. I looked away with mock shame-facedness mumbling 'You must think I'm a real piece of work?'. I returned my gaze and to my absolute surprise she was buck naked and somewhat drunkedly pawing at my suit. 'Ah', I said to myself somewhat regretfully, 'if only I had a glass dildo and two basins of water - one cold, one warm'.

Nonetheless, I soldiered on and after both of us managed to fall up the stairs and land fortunately on my bed (cue lots of Austin Poweresque shouts of 'Ohh I fell over...Ooooh I fell over again) we commenced a bout of frenzied shagging that I haven't experienced since.....God knows when. After about seven or eight positional experimentations the fine young lady sat atop of me and ,with a glint in her admittedly heavy-lidded eyes and a lecherous yet lop-sided smile playing on her lips, she asked me the immortal yet rarely heard question "D'ye want to try something a bit...well.......kinky?" ...............(part 2 to follow) 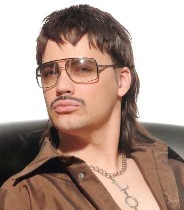