Top
'Twas the night before Christmas, and God it was neat

The kids were both gone, and my wife was in heat

The doors were all bolted, and the phone off the hook

It was time for some nooky, by hook or by crook.

Momma in her teddy, and I in the nude. Had just hit the bedroom and reached for the lube

When out on the lawn there arose such a cry, That I lost my boner and poor momma went dry.

Up to the window I sprang like an elf, Tore back the shade while she played with herself.

The moon on the crest of the snowman we'd built, Showed a broom up his ass, clean up to the hilt.

When what to my wondering eyes should appear, But a rusty old sleigh and eight mangy reindeer.

With a fat little driver, half out of his sled, A sock in his ear, and a bra on his head.

Sure as I'm speaking, he was as high as a kite.

And he yelled to his team, but it didn't sound right.

Whoa Shithead, whoa Asshole, whoa Stupid, whoa Putz, Either slow down this rig or I'll cut off your nuts.

Look out for the lamp post, and don't hit the tree, Quit shaking the sleigh, 'cause I gotta go pee.

They cleared the old lamp post, the tree got a rub, Just as Santa leaned out and threw up on my shrub.

And then from the roof we heard such a clatter, As each little reindeer now emptied its bladder.

I was donning my jacket to cover my ass, When down the chimney Santa came with a crash.

His suit was all smelly with perfume galore, He looked like a bum and he smelled like a whore.

That was some brothel, he said with a smile, The reindeer are pooped, I'll just stay here awhile.

He walked to the kitchen, himself poured a drink, Then whipped out his pecker and pissed in the sink.

I started to laugh, my wife smiled with glee, The old boy was hung nearly down to his knee.

Back in the den, Santa reached in his sack, But his toys were all gone, and some new things were packed.

The first thing he found was a pair of false tits, The next was a handgun with a penis that spits.

A box filled with condoms was Santa's next find, And a six pair of panties, the edible kind.

A bra without nipples, a penis extension, And several other things that I shouldn't even mention.

This suff ain't for kids, Mrs. Santa will shit, So I'll leave 'em here, and then I'll just split.

He filled every stocking and then took his leave, With one tiny butt plug tucked under his sleeve.

He sprang to his sleigh, but his feet were like lead, Thus he fell on his ass and broke wind instead.

In time he was seated, took the reins of his hitch, Take me home Rudolph, this night's been a bitch!

The sleigh was near gone when we heard Santa shout, The best thing about sex is that it never wears out!
Tags: jokes 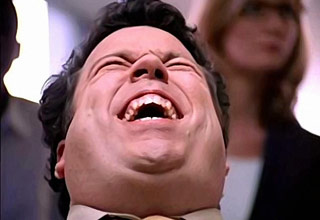