Jake Paul vs. Tyron Woodley went down Sunday night and was, as expected, a chaotic ride from start to finish no matter who you were rooting for. With Paul winning by split decision over the ex-UFC welterweight champ -- especially after being dropped by a hard left by Woodley in the fourth round -- many in the MMA community, as well as generic haters of Paul who see the celebrity influencer as a toolbag of the highest order, were left sorely disappointed Sunday night and Monday morning.

Tyron Woodley tagged Jake Paul in the fourth round #PaulWoodley

Many hoped to see Jake Paul get knocked the f**k out by "The Chosen One," viewing this as one last chance for the ex-champ to redeem himself after a legacy-defining four-fight skid that concluded his tenure with the UFC. And many were disappointed. Many were amused. Some were surprised. And a whole lot of people chose to express themselves with hilarious memes on Twitter as the fight was going down.

Regardless of the fight, Tyron already won with this #PaulWoodley pic.twitter.com/0hqtAeyxzu

Let's not forget the fact that Woodley and Paul had a bizarre tattoo bet wherein the loser was supposed to get "I Love [winner's name]" tattooed to their body after the fight. Well, apparently, Paul brought a tattoo artist.

Greg and Mama Woodley hug while Jake Paul and Tyron Woodley talk shit to each other ???? #PaulWoodley pic.twitter.com/RyPm1oDhDb

Tyron Woodley at the tattoo shop ready to get Jake Paul's name on him...#PaulWoodley

#PaulWoodley Woodley will be a meme come Monday morning pic.twitter.com/hFGRZTHMyO

Jake Paul been added to his meme collection without even losing #PaulWoodley pic.twitter.com/xlcb0qWyMH

If I have to sit through another one of these ‘fights’ and not see one of the Paul bros get KO’d #PaulWoodley pic.twitter.com/CS8z05RLDs

At least he didn’t get KO’d & got PAID lol #PaulWoodley pic.twitter.com/9hmmwL9vfd 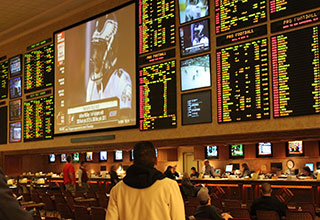 NEXT ARTICLE Online Sports Betting Has Exploded, Our Talk With a Miami Bookie